If The NFL Wants To Improve Player Safety, It Needs To Look Back

The answer to player safety lies in going back to old rules, not creating new ones.

Share All sharing options for: If The NFL Wants To Improve Player Safety, It Needs To Look Back

It's the controversy that won't die.

Defensive players are getting more penalties for hard hits. They're also getting fined for tackles that weren't flagged for penalties. The threat of suspension looms over every defensive huddle. And frustration is mounting as linebackers, safeties, and corners all try to figure out how to do their jobs outside of the way they've been trained to do them.

Meanwhile, people are getting hurt. The Colts' Austin Collie suffered a concussion Sunday when he was sandwiched between two Eagles defenders and there was helmet-to-helmet contact. A penalty was called; that was a penalty that kept the Colts drive alive. It resulted in a touchdown that could have changed the outcome of the game.

But it was a bad call.

That's simply the physics of our bodies. You lead with your head when you run; everybody knows this. The NFL knows this. And if they really expected people to stop running this way, they would flag running backs coming out of the backfield. Because every time a back gets the ball behind the line of scrimmage, he charges head-first into the line. There's been helmet-to-helmet contact on the line on every single play in every single game, since the days when helmets were made of leather.

But there's no overwhelming concussion risks on the line of scrimmage, or on rushing plays. The danger of injury is always present in football, of course. There are, though, far more frequent collisions on the lines than there are for receivers, but the helmet-to-helmet contact there doesn't produce as much traumatic injury. So what's the difference?

Two objects moving at full acceleration will collide with more force from 10 yards away than they will from two yards away. And full acceleration is at a premium in the NFL right now. The league has never been faster. An awful lot of it is just progress; athletic training and sports medicine technology is producing players with strength, speed, and endurance levels that were unimaginable 50 years ago. Helmets and pads are lighter (and stronger) than ever. Playing surfaces are designed, with the exception of Chicago's Soldier Field, to accentuate speed.

And so are the rules.

A look at a history of NFL rule changes shows that since around 1974, the league has put a lot of emphasis into adding "action and tempo into the game".  The bulk of those changes have been aimed at minimizing contact against receivers coming off of the line of scrimmage, and limiting or negating contact in the flat. The 'five yard rule' in particular, has been refined over time to allow  receivers optimal explosion off the line. A player defending against a receiver used to be able to slow down his opponent's initial burst, in other words, try to tangle him up or push him off his route. That's not an option anymore. Now a lot of defenses don't bother trying to engage a receiver at the line, giving him a five to ten yard cushion.

Thus, you have one object moving at full acceleration.

That meant defenses were forced to adjust to new offenses that were engineered to take advantage of the rules changes. As contact was minimized, the ideal wide receiver became taller, lighter, and faster, to become a guy nobody on defense could run with. That made defensive strategies change, creating 'bend but don't break'  defenses like the 'Cover-2' , where the secondary and the linebackers hang back, allowing the short gain and flying to the ball and the ball-carrier.

Slow down those players, and you go a long way towards making the game safer. With the exception of a very few 'shut-down' corners, nobody on an NFL defense can keep up with today's wide receivers. And the league knows that, too. It makes me question the depth of their commitment to player safety. They're having their cake, boasting about fines and disciplinary actions, and they're eating it too, by using their "concern" to handcuff defenses further.

They need to go back and change some rules. They've done it before in cases where necessity called upon them to do so. In 1946, the league decided to limit substitutions. By 1950, they realized that was a mistake, and rescinded the rule. That's why we have two separate units for offense and defense today.

If the NFL wants to advance player safety AND keep the integrity of the game intact, let defenses attack receivers on the line of scrimmage, and in the flats. If a corner or a linebacker can interrupt or slow his route across the middle of the field, everyone is safer.

But if all it wants is to make their game more 'offense-friendly' it can continue to insist that defenders learn to run standing straight up, or holding them behind their bodies, as in this R. Crumb drawing. 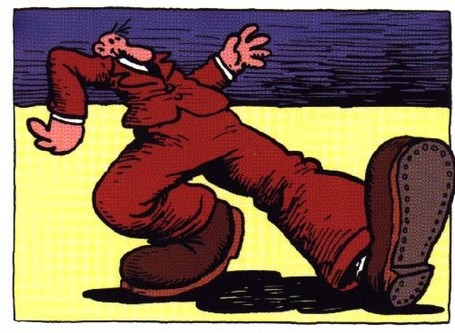 This article is part of an on-going discussion on SB Nation Chicago on the subject of player safety and rule changes. For more information see:Austin Collie Was Lucky; How Much Luck Does The NFL Have Left? ,Does The NFL's Roger Goodell Have Too Much Power? Troy Polamalu Says Yes, NFL: If You Can't Think Of Anything Nice To Say, We'll Fine You, and NFL Rules Vs. NFL Reality: Two Sides That Equal Coin