I was in the UK and Ireland last week and have been reporting back from Europe on my experiences there. Last time I discussed seeing my first ever football (soccer) match when Chelsea took on Newcastle. This post will be about viewing Notre Dame vs. Navy at Aviva Stadium in Dublin, Ireland. Cheers!

I should probably mention that prior to this game I was pretty much on an seven day bender, reaching its pinnacle the night before at a Dublin club hidden away from the majority of the 35,000 or so Americans that flew in for the game called Copper Face Jacks, or as my Northern Irish guides simply called it, Copper's. (Copper's was thrown around by locals as if it was a mythical drunken beast.) It was a dark underground club made up of mostly college aged kids with a random smoking section that magically was outside, yet still under a roof. (I'm still not sure how they did it.) This was the perfect atmosphere for endless Jameson shots and awkward dancing until 4 a.m. I ended up crashing at my buddy Wheeler's hotel in Dublin proper, destroyed.

So, when the phone rang for our 10 a.m. wakeup call, lets say, I was in a daze -- a weak, cloudy, boozy daze. I think if I was in Hollywood I would have been shelved for "exhaustion", but that was not to be. I had a pub to pre-game at and a Notre Dame Fighting Irish game to watch.

The world was moving in slow motion, but I was able to lead my family who, bless their hearts, brought me a change of clothes, to the Temple Bar in the Temple Bar neighborhood of Dublin. This was where the Irish's tailgate was to take place, and it did not disappoint. Notre Dame fans packed the bar, making a spot hard to fine, yet we did in their amazing patio with ivy pouring overhead from red fences and brick walls, the sun warming the pub. "We Are ND" and the Fighting Irish theme song were chanted and sung throughout Temple Bar.

After a quick DART (the Dublin version of our 'L'), we were let off directly in front of Aviva Stadium. We walked through the gates and ended up in the VIP section. We enjoyed a few pints and made it to our seats just in time for kickoff. This was our view: 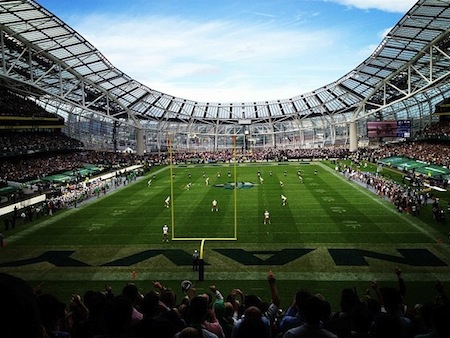 It wasn't the worst.

Aviva is a wonderfully built stadium with overhangs protecting most of the fans from any bad weather -- which was not necessary on Saturday. The stadium reached its peak longways at our end, slowly moving upwards in the middle then gently moving down towards the opposite endzone, revealing an amazing view of Dublin proper. The field itself was normally used for rugby, thus wider than your typical America football field. This pushed us back a little further than what we experienced at the Chelsea game the week before.

Drunk and tired, it was hard to see the other side of the field at times, but it was clear that 2010 was over. The Irish dominated the game from the kickoff. Led by sophomore quarterback Everett Golson, the Irish stormed down the field on an 11 play opening drive that nearly lasted six minutes. It was capped off by Theo Riddick 11 yard scamper.

The Irish defense, which looked very impressive for the majority of the game, stopped the Midshipmen on two straight drives -- one a fumble recovery -- leading to a George Atkinson III 56-yard TD run and a five-yard TD pass from Golson to Tyler Eifert. More impressive for the Irish was on the next Navy drive and turnover, when the 303 pound Stephon Tuitt returned a fumble 77 yards to the house. My reaction to the lovely blond from Kentucky next to me, "Holy shit. He just outran a running back." At that point, the score was 27-0 and the game was well under hand.

Other than a sick Manti Te'o pick, the game pretty much went according to plan. The Irish focused their game to the ground game and the Midshipmen did their best to throw their way back into the game -- very uncharacteristic of a Navy team. The game ended in the Irish's favor 50-10.

After the game, we spent about an hour in the VIP section, my dad flirting with the wait staff, while I discussed politics with the smartest man I have ever met, an Irishman who talked about insanely complex things like the U.S. and Irish dept like I'd chat about what I had for lunch. He basically fixed the U.S. economy in a 30 minute conversation. 45 minutes later I was in the Irish countryside, watching the moon rise over the ocean.

Moving forward, I will have a more organized recaps of Notre Dame games published on Mondays. So, for now, lets just talk about Purdue (and their fans) for a few seconds.

Last year, Bobby and I had a little tiff with Boiled Sports, a Purdue fan site about some stupid Notre Dame stuff. They seem not to remember. 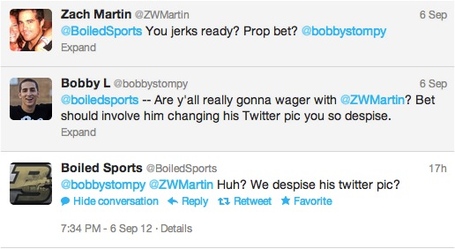 Whatever. Notre Dame is favored by 14. That seems about right. Purdue is so lame.

I will probably add some section here that is super and fun.