Steve von Horn has some good news for NFL fans. He also has a Chicago Bears Playbook video he wants to show you.

When the Chicago Bears lift the lid on their 2012 NFL season on Sunday in a Week 1 matchup against Andrew Luck and the Indianapolis Colts, there will be an extra reason for hardcore NFL fans to smile. For the first time ever, the league has offered fanatics the opportunity to access All-22 coaches' film (learn more here). In case you didn't know, the All-22 film allows the viewer to see every player on the field at the same time -- unlike traditional broadcast angles that focus on the offensive and defensive lines and avoid showing the defensive secondary until a pass arrives at its final destination. This is a step in the right direction for the league, especially as they work to keep a generation of Madden fans engaged in the game at all times.

Last November the NFL didn't think we deserved the chance to see football from the All-22 angle. In fact, league representatives found several politically correct ways to say they felt fans are too stupid to use coaches' film well. It's a lazy line of thinking that has managed to endure in some forms, but thankfully the league has backed off its perceived need to restrict access (probably for the sake of money, but that doesn't matter). I ripped the NFL a new one last season for denying fans the opportunity to experience the nuances of the passing game in an increasingly pass-heavy league, and here was the crux of my original argument:

Watching quarterback play from your couch is still exhilarating, but for all the wrong reasons. Routes of wide receivers and tight ends take place almost entirely off screen, and defensive configurations in the secondary are virtually invisible to even the most interested fans watching at home. Being a spectator to modern vertical passing attacks currently means you are left guessing about whether a deep pass is well-covered until the camera finally pans to the intended receiver. Essentially, passing attacks are exciting because the context of each long pass attempt remains a mystery until the last second. To think this is acceptable to NFL executives is insane.

...Having to rely on analysts and commentators to describe action that could easily be displayed on screen is an indefensible crime for which the NFL should have to answer in a meaningful manner. It is clear that the league should let the fans decide how much of the field they want to see, not preemptively restrict access under a bogus "proprietary NFL coaching information" defense. Deep and intermediate passing plays should not be a mysterious aspect of the game necessarily digested in fragments; they should be presented as wholly visible art forms for the viewing pleasure of NFL fans everywhere. In many ways, football fans have been seeking out this art form for years in video game simulations, but the clear demand for the All-22 has fallen on deaf ears. Although the revolution has already arrived, the NFL has unilaterally decided that the revolution will not be televised, and it's a damn shame.

I still feel my opinion was entirely appropriate for the circumstances, and I wouldn't change a word, but times have (thankfully) changed. The situation has improved. We will have new opportunities to digest what we see on a deeper level. Now it's about following through.

I purchased the NFL's new All-22 product as soon as they released it, and during the 2012 season I plan on trying to break down various plays soon after the footage is released each Thursday. To illustrate my original point, let's take a quick look at what we see on television during a deep pass attempt: 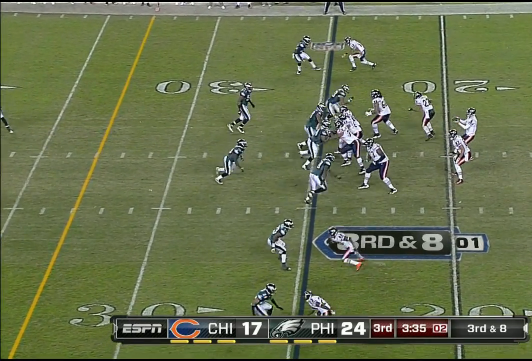 If you look closely at this image I pulled from the Bears' Week 9 matchup against the Philadelphia Eagles, you can actually see the shin and foot of one of the Eagles safeties! Take a second to process that absurdity. We glorify quarterbacks for reading defenses and deify safeties for changing the way offenses can attack, but live-action angles obscure the secondary. It actually gets worse, if you'd believe it. Here is an image of what we had to look at when Jay Cutler released the ball on that same play: 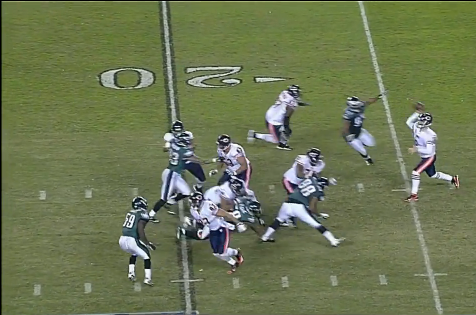 The play includes four different routes and the Eagles play two deep safeties in zone, but how the heck could you tell any of that from what is presented on the broadcast? Just to be clear, we get the privilege of watching: (a) zero receivers, (b) zero cornerbacks, (c) zero safeties and (d) zero route combinations during most intermediate and deep passing plays. At least Jay Cutler looks good, right?

With All-22 access, the chess match in the secondary is revealed and play designs take on deeper meaning. It's easy to say all of this, but I maybe it's better if I show you. Here is my first installment of a recurring Chicago Bears Playbook Series for SB Nation Chicago. In the first volume I will pick apart the same play from that Week 9 game in 2011:

It's time to show the NFL that fans deserved the opportunity to approach the game on a deeper level. It's time to show skeptics that there is no such thing as having access to too much good information. It's time to have some fun with Chicago Bears football. I plan on doing my part in 2012, so I hope you find the time to follow along and help the series evolve.