U.S. Open Men's Semifinals 2012: Who Should You Root For? (Favoritism)

Share All sharing options for: U.S. Open Men's Semifinals 2012: Who Should You Root For? (Favoritism)

The men's semifinals of the U.S. Open are upon us. Missing are household names like Roger Federer, Andy Roddick, and Rafael Nadal. So who, exactly, is left? And who should Chicagoans like us be pulling for?

Let's deconstruct the field -- after the jump.

Typically old Andy is a fan favorite and, on a much more successful scale, a 'lovable loser' similar to the Chicago Cubs. Over this last summer, that general perception has started to shift, however. After blowing the Wimbledon final (a de facto home match) to Roger Federer in July, Murray finally topped Federer in a big moment less than a month later at the London Olympics -- *at* Wimbledon.

The media used this as a springboard to say "Andy finally did it! This is basically like a grand slam! He's in position to win the big one now!"

As it stands, Murray still hasn't won a grand slam. And I'm so burnt out on the public sympathy for this dude, I could definitely wait until 2013 to see him finally -- finally! -- break through.

By his immensely high standards, Djok hasn't been playing super elite lately. After completing arguably one of the greatest individual tennis years of all time in 2011 and then marathoning Rafael Nadal to take the 2012 Aussie Open at the start of this year, the Djoker has stumbled a bit. He failed to capture the next two grand slams (French, Wimby) and didn't even medal at the London Olympics, falling to Juan Martin del Potro in the bronze medal match. While he's undoubtedly still a Top 3 player in the world, winning this U.S. Open would almost feel cheap after getting to duck Nadal and Federer*. Still, he's probably your most deserving champion of these four. The display he put on in his revenge match against del Potro in the QFs was some of the best tennis I've seen played in 2012. He was electric.

* - this is what Nadal fans say about Federer all the time*

Three months ago, if I told you a Top 4 seed from Spain would make the men's final after a gauntlet of a quarterfinals match, you probably would have penciled in Rafa.

Ferrer has to crack the Top 2 of this list mainly because I wrote him off earlier Thusday on Twitter after he went down in fifth set against Janko "Tipsy" Tipsarevic. He then valiantly battled back, won, and I totally had to eat crow. It was great. For him.

Casual fans might pull for Ferrer because, at 5 foot 9, he's a nice reprieve from big bashers like Jon Isner and the like. But, for some perspective: not only has Ferrer never won a grand slam -- he's never even played in a final.

If Berdych wasn't on the radar of casual tennis fans before this week, his upset of Roger Federer in the quarterfinals certainly captured some attention. Though he by no means brings the star power of the Big 3 (or Big 4... hi, Andy!), he's a tall dude (6 foot 5), hits huge shots, and has a very telegenic game. If tennis was an arms race, he definitely has the firepower.

Berdych probably deserves to at least make the finals after solving Federer in the QFs. If he were to do so, he'd double his lifetime grand slam finals appearances; the other being at 2010 Wimby after he beat -- oh yes -- Federer. Warrants mentioning: he also is waiting to capture his first slam.

And, for the superficial, we'll end this with a picture of his girlfriend. 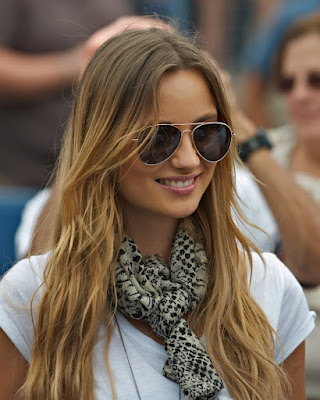 I dunno, man. You make the call.

Bobby Loesch is a weekly contributor to SBN Chicago. He can be reached at bobbyloesch [at] gmail.com. Follow him on Twitter @bobbystompy.