The spirit of Kevin Hickey isn't just on the sleeves of the Chicago White Sox. It's on the team's faces, too.

After getting swept in a three-game series by the Detroit Tigers this weekend, the White Sox returned home to start a new set with the Minnesota Twins. Monday's opener featured a pre-game ceremony honoring Hickey, a South Side native who made the White Sox during an open tryout in 1978 on the heels of nothing more than a distinguished 16-inch softball career. Hickey, who passed away earlier this year, rocked a mean mustache in the '70s and '80s. With the Sox looking to get their swagger back after the debacle in Comerica Park, and the festivities for Hickey looming on Monday, several Chicago players decided to shave their goatees into full blown mustaches.

The results were mostly hilarious. 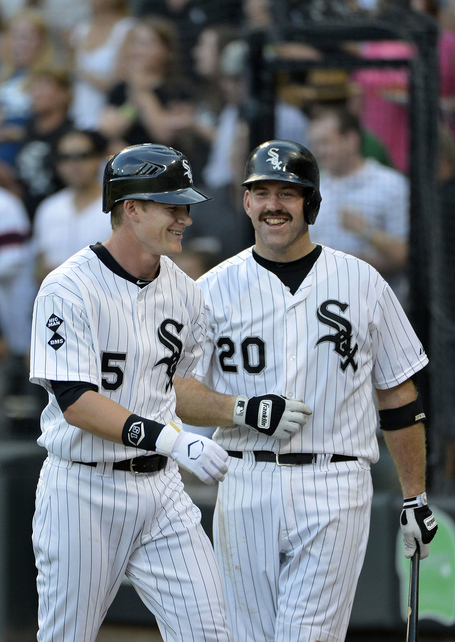 Paul Konerko and Chris Sale were among the other White Sox players to dawn a quick 'stache. Tuesday's hero Gordon Beckham, who drove in three runs during Chicago's 4-2 series opening victory over the Twins, isn't lucky enough to have quick-strike facial hair ability (via SSS).

"It's going to take me until next spring to get mine fully out, but I'm going to try,'' Gordon Beckham said. ``Everybody's in on it. It comes fitting today because of Kevin Hickey and this game is about him and we won. He has a plaque up in here now. It was good to remember him with a win and now we're starting the Hick moustaches. We'll ride these out."

A White Sox win coupled with a Tigers loss on Monday means the Sox are back in first place in the AL Central by one game.

Jose Quintana starts for the Sox on Tuesday against Minnesota's Scott Diamond.