Share All sharing options for: Bobby, the Leprechaun: recapping Notre Dame vs. Michigan

This just feels... so good. So, so good. It's hard to describe because this feeling comes so infrequent. I'm not sure I have words for it. They do say a picture is worth a thousands words. How about a picture then? This is me as the clock hit zero Saturday night. 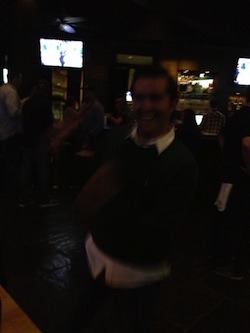 Look at the joy. The bloodlust for Wolverine flesh. The twinkle of one too many Jameson on the rocks in my eye. The pure ecstasy knowing Bobby will now have to dress as a Leprechaun. It's all too overwhelming, really.

The last time I felt this way was in 2010 when a certain hockey team won a certain Cup. This feels like that -- a regular season victory, no less -- because Notre Dame Fighting Irish football is uniquely special to me. It's the only team I'm super weird about. Typically, I can't watch games with people. I have to be home alone, able to rewind all the good, but usually the demoralizing, breaking down what went wrong.

Not this time. This time I went to Zellas on Clybourn -- a newly crowned ND bar -- to celebrate with the children of Erin. Watching the destruction of Michigan at the hands of the ND defense (I told you) with a group of like-minded fans was something special. It was something needed to wash away the dark places of my brain from everything I know about Irish football.

This is a wonderful feeling.

Things were weird from the start. Mr. Conservative-Don't-Get-Picked-Under-Any-Circumstance, Everett Golson, got picked on Notre Dame's first play from scrimmage. From there, Michigan's offense, led by the Carrie Mathison of college quarterbacks, did the following: -2 yard run, -3 yard sack (by the awesomely named and awesomely good, Prince Shembo), called a timeout, -10 yard sack (by Julius Pepper 2.0, Stephon Tuitt) and missed a 43 yard field goal. Turnover, momentum, early lead on the road against a rival... wasted.

The previous series of events pretty much described the game as a whole. Someone turned the ball over, then (mostly) nothing came of it. It was a battle of punts and turnovers. The Irish punting. Denard Robinson throwing to the wrong team.

For the third straight week, an anemic Irish offense pushed across just enough to win. After Golson threw two picks -- the latter from the Wolverine 10 yard line -- Tommy Rees was called upon to do what Tommy Rees does: barely enough. (Rees also does that other thing: suck ass.) After another Robinson interception, Rees led the Irish on an eight play 48 yard touchdown drive, capped off by a Rees two yard run. It took me a few moments to actually acknowledge that Coach Brian Kelly called a QB draw for Rees... intentionally. Surprise!

As for the Wolverine offense: 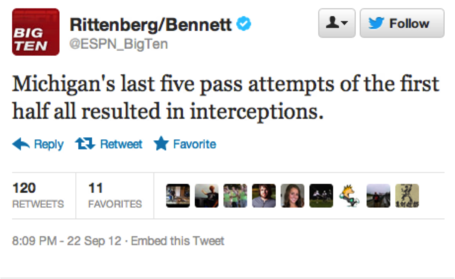 Notre Dame went into halftime with a 10-0 lead.

The second half in a nutshell:

Notre Dame: Wasted some time, didn't turn the ball over and kicked another field goal.

Michigan: Refused to let Robinson throw the ball (four passes attempted in the 3rd quarter) and kicked two field goals. Oh, they also turned the ball over again. (The sixth of the game. Five total by Robinson alone.)

I know I've been harping on this since the second week of the season, but Notre Dame's defense is outstanding. Kelly made it clear that his number one goal was to recruit defense. (He also said his offense would score no matter what. One out of two ain't bad.) His commitment to that side of the ball is paying off. The Irish front seven is scary: fast, athletic and physical, they are comparable to any program not named Alabama. (Shit, maybe even Alabama.) It is filled with four and five star recruits and they are coming of age. Even their much maligned secondary is on fire, staying with recievers and picking off poorly thrown balls by QBs under pressure.

The Irish defense is allowing nine points per game and has given up only three touchdowns in four games. They are second in the nation with 13 turnovers forced, ninth in sacks with 14 and 16th in total defense. Note to the rest of ND's 2012 schedule: Be afraid, be very afraid. 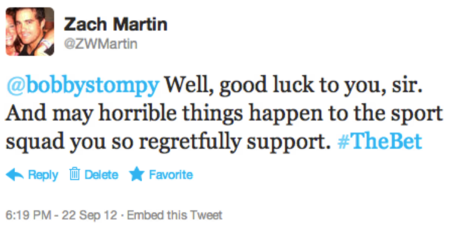 If I may use a baseball analogy. Tommy Rees is Ryan Theriot. He's a "just enough guy". The type of shortstop that will make the routine play, beating the runner by half a step because his arm strength is "just enough". He'll hit .290 and lead the league in singles, but he'll never make the play in the hole or hit 20 home runs. There's nothing about Theriot or Rees that scares anyone. They are fine, average.

Everett Golson is Starlin Castro. Young and talented, Castro has yet to reach his potential, but can already make the play in the hole because of his quickness and gun for an arm. He can hit the long ball, too. Casto also led the league in hits, not singles. He's raw, but talented. He'll make a mistake, but he can also make the big play. Castro and Golson may hurt you now and again, but they also have the ability to beat superior teams or players because they're just as athletic and skilled. They are great, stars.

Kelly's offense is best when there's at least the threat of a vertical passing game and the QB under center can run. Rees cannot do either. Golson can. It's that simple.

Navy (I was in Dublin) / Purdue

Enjoy the off week.