Share All sharing options for: The Bear Trap, Week 3: Bears vs. Rams

Welcome to The Bear Trap, a weekly look at the Bears game that was. In this space we will deal with the most pressing issues surrounding the Bears and their previous game. We'll favor overreaction, both positive and negative, to fair, balanced analysis. We'll ask if the Bears should withhold planning the Super Bowl Shuffle 2012 music video and if Brandon Marshall's erratic off-field behavior has derailed the season yet. We'll wonder if Jay Cutler is best described as aloof or super-duper aloof, and tally the number of fucks the notorious Shoulder Shrug has given up to this point. All that, plus some old fashioned Packer hate. We'll keep if lighthearted as long as it's understood the hate is real and comes from a dark place.

So submit to the oddly cathartic sound of a snapped ligament. You'll never again allude the wild beasts that have spared your life for far too long now. Giving in is easier, so give in to The Bear Trap.

Game Ball - Starting next week, we're going to start referring to this as the Tim Jennings Honorary Game Ball. Jennings made another strong case this week with an interception, a pass break-up that led to Major Wright's pick-6, and for keeping Danny Amendola (15 receptions for 160 yards last week) in check. As always, in the interest of diversity, we're going with someone other than Jennings. The entire defensive line is the pick this week, with a special distinction given to Israel Idonije. Idonije stood out amongst a unit that won the game for the Bears. He spent most of his time in the Rams backfield, performing full body cavity searches on Sam Bradford and whichever unlucky running back happened to be carrying the ball.

The Optimist's Take - The vintage Bears defense we've grown accustomed to is back. We controlled the line of scrimmage, swarmed the ball, forced a couple turnovers, and swung the game with a defensive touchdown. Bradford and the Rams offense looked shockingly competent through their first two games. Jackson pounded the ball and Bradford efficiently picked apart defenses with short to intermediate passes to a number of different receivers. Critics will dismiss this game, but they shouldn't. The Rams offense is pretty good. We made them look awful.

The O-Line played better than last week, which is all you can really ask for at this point. Michael Bush and Kahlil Bell can't replace Forte's production, but they did a good job of keeping the defense honest. Robbie Gould was stellar as usual.

The Pessimist's Take - The Bears beat a mediocre team at home. Get excited about that if you want. They face a big road test next week in Dallas. We know what they are against good teams with a pass rush. They were crap on third down (4-14), and even worse in the red zone. How exactly do they expect to win against good teams when they're not converting third downs and settling for field goals in the red zone? Oh, right. They're expecting a bail out from their defense or their opponent. Three of their 23 points were from a stupid running into the kicker penalty and 7 were from an interception return. Thirteen points from the offense isn't good enough. And even though Cutler was only sacked twice, he took a bunch of huge hits.

NO. The Bears have picked out their plane tickets on Expedia.com. They've typed in their personal and credit card information. Then they wait, staring at the screen. By the time they make the decision to go through with it, the page has expired. They question (again) whether they can really afford to spend the money.

This Week's Adjective to Describe Jay Cutler - Pallid. Anyone who has watched Jay Cutler enough knows he has those days when he looks flushed and doughy, mouth slightly agape like a child waiting for a spoonful of food. It's a look somewhere between Las Vegas bender and the 18th hour of a 24-hour stomach virus. Cutler rarely plays well when he's especially pale-faced, as he was Sunday, but the Bears always win. Near death never looked so good.

Number of Fucks Given This Week - 0 for a total of 1 on the year. Cutler came dangerously close to giving a fuck late in the game while jawing with Cortland Finnegan. If anyone is capable of getting a rise out of the world's most apathetic human being, it's Finnegan. Alas, Cutler dismissed Finnegan with one of his patented wrist flips. They'll both live to be an asshole another day. 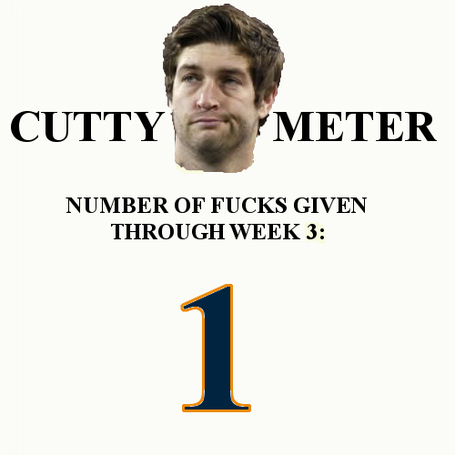 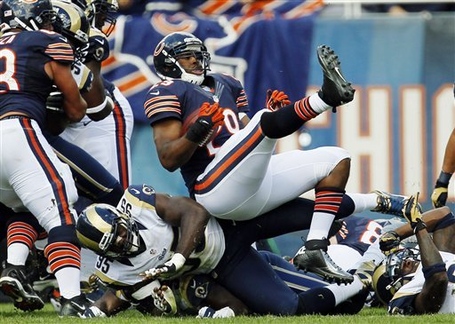 You surely have a younger sibling or cousin you used to horse around with back in the day. Being older, you know you are of superior strength and intellect. Yet, something, always seems to go wrong. Example: you're wrestling with your younger brother, slip, and smack your head on the edge of the desk. You're momentarily dazed and possibly concussed.*

* - This is the 90s, where concussions are given as much thought as lead paint was during your parents' childhood.

Your brother has pinned you to the floor as you struggle to regain control of the wrestling match -- and your consciousness. By the time you've come to, you decide this game isn't fun anymore. You throw him to the floor and sit on him. Game effectively Over. This is Michael Bush sitting on defensive end William Hayes. Major Wright's pick-6 was the undisputed 'Game Over' move, the moment the Bears decided to stop playing around and put an end to the game.

Requisite Packer Hate - The Packers don't play until tonight, leaving us with the typical 'Countdown until Clay Matthews is suspended for PED use' jokes. In lieu of Packer hate this week, allow the author to say a few words about Seahawks quarterback Russell Wilson. The stories about Wilson -- his leadership, poise, locker room presence, etc. -- are not the usual media bullshit. He's the most likeable football player I've ever come across just from watching him a year at Wisconsin. Not to mention his skill set if off the charts. If he were 3 inches taller he would have been a Top-10 pick and the third quarterback taken in the draft. Don't get me wrong, I'm glad he's three inches too short. If he weren't he would have been drafted by the Browns or Dolphins and his career would have been over before it started. I knew, everyone who watched and rooted for him knew he was going to be a starter in this league well before it became official. I've a very fidgety, nervous, miserable football fan. I don't enjoy myself one bit during the game. Wilson is the only player, college or pro, who's play has allowed me to relax and enjoy myself watching a football game I've had a vested interest in. He just inspires confidence. It's cliche, but it's true.

Packers fans have rediscovered their cockiness. I'm looking forward to Wilson and the Seahawks stripping it away. Hopefully in the most agonizing way possible.