Share All sharing options for: The Bear Trap, Week 2: Bears vs. Packers

Welcome to The Bear Trap, a new, weekly look at the Bears game that was. Where was the Bear Trap last week, and why is it so late this week? Well, the author needed to get his shit together, much like our offense in the first two series against Indy. If the O-Line is allowed numerous false starts, then surely I am allowed one.

In this space we will deal with the most pressing issues surrounding the Bears and their previous game. We'll favor overreaction, both positive and negative, to fair, balanced analysis. We'll ask if the Bears should withhold planning the Super Bowl Shuffle 2012 music video and if Brandon Marshall's erratic off-field behavior has derailed the season yet. We'll wonder if Jay Cutler is best described as aloof or super-duper aloof, and tally the number of fucks the notorious Shoulder Shrug has given up to this point. All that, plus some old fashioned Packer hate. We'll keep it lighthearted as long as it's understood the hate is real and comes from a dark place.

So submit to the cold, rusted metal as it sinks deeper into your leg flesh. You're already bleeding anyway and resistance only accelerates the process. It doesn't seem like it now, but The Bear Trap is the most loyal friend you will ever have.


Game Ball - Tonight's Game Ball goes to 'Time' because, as encouraging (or probably discouraging) as it would be to give it to Tim Jennings every week, we just can't do that. 'Time' because the clock eventually stuck 0:00 to put us out of our collective misery. 'Time' because it supposedly heals all wounds, and Matt Forte's ankle needs healing.

The Optimist's Take - Green Bay at Lambeau is never an easy task, especially when they're coming off a loss. I mean, it had been, what, eight months since they'd won a game? It had to happen eventually. And to be clear, reports of Green Bay's demise were greatly exaggerated. The Niners are going to make every high-powered offense look average this season and the Packers defense is too talented to resemble swiss cheese for two straight years. Dom Capers made exactly 0 adjustments last year. He's going to smarten up a bit this year because his job depends on it. Truthfully, Green Bay is the 2nd best team in the NFC, and just happened to look bad against the class of the conference in Week 1. We'll look back at this as a more than reasonable road loss.

The Pessimist's Take - Cutler managed 126 yards passing against a defense that made Alex Smith look like a fucking Pro Bowler. All this talk of a revamped offensive attack, and Brandon Marshall hauls in two catches, two less than the Packers defense, if you're keeping track. The offensive line, a unit that was supposedly good enough to keep intact, could have laid down at the snap and produced the same effect. This is the same team we've seen the last few years. O-Line can't stop anyone, Cutler throws the ball into crowds like a game of '500' and even when one of our receivers manages to get his hands on a ball, he drops it. Too much pressure on the defense to be perfect, as always. Forte is injured and we gave Cedric Benson the boost of confidence he needs to legitimize Green Bay's previously non-existent run game. We'll be lucky to win 9 games.

NO. The Bears are going to talk to Steve Slaton about a workout. The same Steve Slaton who couldn't earn a spot in Miami -- the zenith of running back depth.

(NOTE: This did not happen. They signed Khalil Bell, which somehow feels even worse)

Number Of Fucks Given This Week - 1 for a total of 1 on the year. J'Marcus Webb is wondering what that clear substance he was injected with was, and why everything has been pink and purple the last three days. 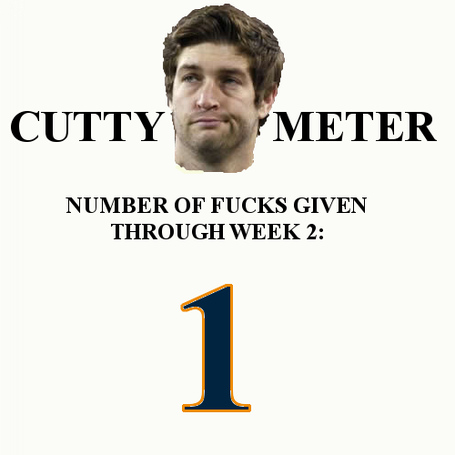 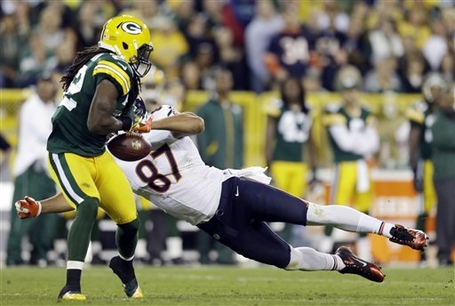 Forget everything you know about football for a second. Forget that 87 is a receivers number, and 42 a secondary number. Forget that Kellen Davis is a tight end and much too large (6'7, 267) to play safety. Now tell me Green Bay's Morgan Burnett does not look like the intended receiver in this picture. This pretty much sums up our offense on the night.

Requisite Packer Hate - If you think a) this commercial is funny, b) enjoy the song playing, and/or c) eat Pizza Hut, you are a terrible person, beyond saving, and almost certainly bought stock in the Packers.

Now if we can get Rodgers to shush Jermichael Finley following the drop of a perfectly thrown pizza slice, then we might have the makings of a good commercial.