Paul Lukas, ESPN's long-tenured in-house fashionista, recently ranked the uniforms of every team across the four major professional sports according to his own whims. The Chicago Bears finished No. 2, falling only behind the timeless sweaters of the Montreal Canadiens. The Bears' ranking registered as a bit of a surprise, even for the football-crazy denizens of Chicago. I like the Bears' uniforms just fine, but the second best in the all of sports? Totally did not see that coming.

It would seem as if not everyone thinks as highly of the Bears' uniforms as Lukas. Take EA Sports, for example. In the latest edition of its signature football video game, Madden NFL '13, the Bears are equipped with the wrong color pants on the road. We have a picture, after the jump... 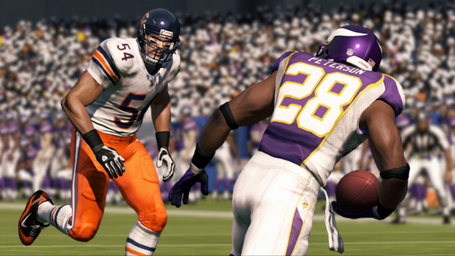 The mistake is so puzzling it makes me wonder if the Bears really are making the orange pants part of their permanent road look this season. Madden is so culturally ingrained, so immensely popular, that a goof up like this usually doesn't occur.

Be sure to check out James Brady's review of Madden '13 at SB Nation Bay Area.