If you're sharp enough to find your way to SB Nation Chicago, I don't think it needs to be pointed out that Michael Jordan is quite wealthy. MJ was earning around $30 million per season during his last few years with the Chicago Bulls, and I'm pretty sure he's still cashin' "bacon neck" checks. The man has done alright for himself. That's why it's so jarring to see "His Airness" place at No. 87 on a recent list of career NBA salary earnings. Jordan is behind such luminaries as Derrick Coleman, Damon Stoudamire and Brian Grant. MJ also checks in 61 spots behind our mutual best friend Carlos Boozer. Carlos Boozer!

Eighty-seven. It goes to show the exponential jump in salaries over the last 15 or so years. Nearly everyone on this list had a career that stretched into the last decade; all but three of the top 20 earners all-time remain active. It's also staggering to see Scottie Pippen ranked ahead of Jordan, as Pippen's off-the-court tenure in Chicago was characterized by a long-standing contract dispute.

You'll also notice that five of the top 13 earners jumped from high school to the pros. The lesson, as always, is that school is for suckers and the current age-limit is terrible.

Check out the top 100 NBA salary earners, after the jump... 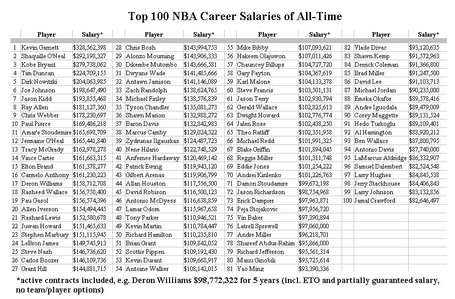 There are probably more.