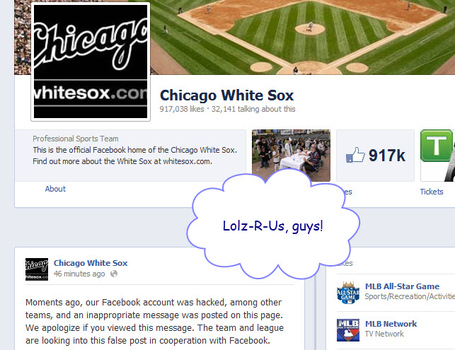 Some of those famous Internet yucksters, y'know, the Internet, right? And yucksters? You know yucksters!, got into the Facebook cookie jar and started clowning on various MLB squads this afternoon. Among the few, the proud, the zinged Facebook accounts? Chicago's very own White Sox and Cubs. The offending posts (which since have been removed) are after the jump...

So what can be ascertained from this haxor, ALL YR LOLZ ARE BELONG TO US job? Well, not too much aside from the fact that they've got a pretty funny sense of humor. Because, really, who's gonna vote for Romney? And on a popular, youth-based "social network" on a "complex series of tubes"? No, I don't think an insulin-sucking, septuagenarian is gonna be "getting down with the sickness" of Facebook and telling people to vote GOP. Nice one, haxorz., though your troll skillz could stand some polishin'.

This is Southpaw, Nate Robinson is not what I wanted for Chicago. I'm sorry, Bulls fans.

Certainly concise and maybe with a touch of unintentional artfulness to the message. Murray for years has been a lightning rod for debate among Cubs fans. "He's cool, man." "No way, bro. Get fucked." Et cetera, et cetera. In my eyes, Murray is infallible, what with the Ghostbusters and the cameo [spoiler] in Zombie Land, so, whatever, hackers. [wanking motion]

Though the low-hanging fruit of "CUBS WIN WORLD SERIES" is tempting, a better option would have been to mock and ridicule meddlesome jackass/Rich Uncle Skeleton, Joe Ricketts for his leaked, anti-Obama agenda and his throwing millions into Wisconsin's hotly contested recall election:

THIS IS JOE RICKETTS AND I'M HUMAN GARBAGE. BLARGH! COME HERE AND GIVE ME YOUR YOUTHFUL STEM CELLS SO I DON'T DIE! BLARGH!

Other teams that were hacked included the Yankees (Derek Jeter joke. Predictable, Unfunny), Nationals (Moving back to Montreal joke, sorta clever), Padres (A PetCo Park reference with no pet jokes? Stop. Wasting. My. Time), Giants (Chick-FIl-A joke. Meh. 2.5 stars?), and Marlins (A pitbull joke, but not a Pitbull joke?! SIGH.)

What do you think about the hacks? Funny? Dangerous? Pointless? Do you have a better hacked post you'd like to see? Let us know in the comments.