Three-time Olympian Dathan Ritzenheim isn't the most imposing of athletes. With a short, blonde, crew cut and standing 5'8 and 120 pounds, Ritzenheim's look speaks more middle-management than world-class athlete. Yet, a closer look reveals leg muscles poured from pig iron and forged by Hephaestus. Wearing x-ray goggles? Then a quick look at Dathan's (rhymes with Nathan's) heart would reveal an impossibly low resting-heart rate And if somehow you could measure his pain threshold with your magic goggles you'd realize the ungodly sting of lactic acid --you know the sensation: metallic bite to your saliva, ghastly cramps, wanting to puke-- is shrugged off by Ritzenhein with the practiced nonchalance that comes from mile, after mile, after mile of pavement (and pain) eroding runs.

Ritzenhein, following Sunday's Closing Ceremonies in London, found himself back in the US of A and in the Windy City for a few Chicago Marathon promo events. While here he took the time to chat with SBNation about growing up in Michigan, his thoughts on the OLY's and the Chicago Marathon, which he'll be running in for the first time later this fall, among other things. Talky-talk words after the jump.

SBNation Chicago: Congrats on your finish at the 10K in London --Dathan finished in 13th in the 10,000 meter, no small feat considering he spent most of the season recovering from multiple injuries and surgeries on his Achilles in the 2K11-- how did you feel with your finish, your health?

Dathan Ritzenhein: Thanks. Yeah, I wasn't thrilled with my race, I made a few mistakes, but it felt great to be racing and ... healthy. I mean, it was the Olympics which is always an incredible experience.

SBN: What did you experience in London? Did you check out any other sporting events, were there any athletes you made an effort to check out?

DR: Not really. Unfortunately, between competing and, honestly, tickets being really tough to find, I didn't get to check out too much. But it was great being in London. The city did an amazing job of hosting the world and making all of us athletes feel incredibly at home. London did an great job hosting the Games.

SBN: At the Beijing Games in '08 you ran the marathon (finishing 9th and he was the first American to finish) and this year in London you ran the 10,000 meter. Were there any big changes or differences in leading up to London vs Beijing?

DR: Kind of, but with London, I was coming in healthy and much more rested and in better physical health than I was in Beijing. That was a big difference and after 2011, being out and ready to run really meant a lot.

SBN: Transitioning from the 10K to the marathon distance for Chicago later this fall, is there anything strategy-wise that you're changing up?

DR: There are a few things I'm looking to change. Heading into London I was more focused on shorter, more intense runs vs volume and distance. For Chicago that switches somewhat in that I'm looking towards working on some longer, more volume runs to prepare for the distance. But, I mean, for a normal runner you're maybe looking at a 3-4 month training regiment and for myself, considering the shape I'm in from London, it's a quicker turnaround, a few weeks, and I think I'll be ready.

SBN: In Chicago, do you have any goals for yourself? Hope to PR (personal record for the n00bs)? Top-5? Top-3?

DR: I plan to PR. Chicago is a pretty fast course and part of my training has been to study historical data and times and looking at those numbers I think I can PR.

SBN: What are those times/numbers? Any patterns?

DR: Well, the numbers are pretty clear, a finish time around 2:07:00 usually is going to assure you of a top-three finish. [Ed. Note: For someone who has run 17 miles in about that same time, finishing 26.2 miles in 2:07 is really, really, really fast. Pros, guys, they're good at their sports.] And as far as patterns go, I'm really looking to study old tapes to see where the lead packs have made a surge to distance themselves so that on race day it won't be a surprise when it happens. As part of my training we drove around some parts of the course last night just to get a feel for the race and I plan on looking at more footage from race days (no traffic lights, no cars, no buses) to get a sound idea of what the course is like.

SBN: You're originally from Grand Rapids, Michigan and peer/rival of yours Alan Webb is from Ann Arbor and is around your same age. Michigan isn't necessarily what people think of when they think of distance running. What was it like knowing Alan from back in the day and how did you get into running?

DR: I actually got into running around the age of 10 when my dad joined a Grand Rapids running club, from there on out he and I were doing local 5K's, triathlons, 10K's, whatever on every weekend. Alan and I raced a few times before high school and were sorta joined at the hip with training and being featured in SI before he moved (to Virginia) we were pretty competitive and now (they've been an off-on teammates out of Nike's Oregon Project and both train in/around Portland and Beaverton) we've become better friends and rivals. It's been pretty great to see.

SBN: Distance running in the American sporting landscape is pretty back there, but you, Webb, Ryan Hall, Matt Tegenkamp have all made an international impact on the sport. How has that experience been?

DR: It's been tough and completely worthwhile. I think that when you look at the dominance that the Ethiopian and Kenyan teams bring we've really narrowed that gap and you couldn't say that ten years ago. Past those two countries, the USA has been right there in terms of trips to the podium at Worlds and other international events. To have been a part of that is awesome.

SBN: Thanks a lot for your time, congrats on London and good luck in Chicago.

Dathan Ritzenheim will be competing in the Chicago Marathon on October 7. 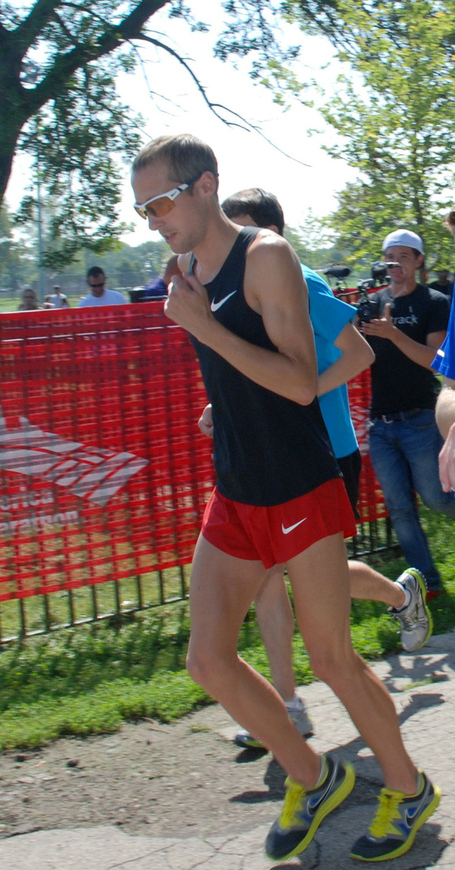