Share All sharing options for: The Dream Team Will Be Featured In NBA 2K13 Without Scottie Pippen

The 20th anniversary celebration of the famed 1992 U.S. Olympic basketball team is about get a lot more interactive. Following a wonderful documentary and countless corporate promotions, the Dream Team will now be featured in NBA 2K13.

Only one problem: there's a notable player missing from the official picture of the squad posted by 2K Sports. Where's Scottie Pippen? 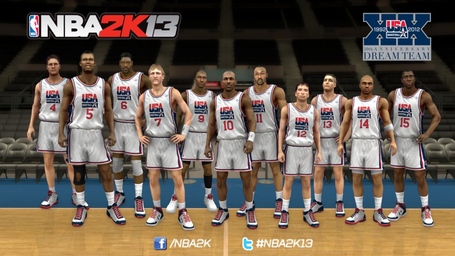 According to ESPN's Zach McCann, Pippen couldn't reach an agreement with the company, meaning his likeness will not appear. What's particularly strange about the situation is that Pippen has been featured in each of the last two installments of the 2K series as a member of the Chicago Bulls.

If not for the absence of Pippen, the big news would have been the inclusion of Charles Barkley, who is apparently very expensive. For fans who have waited to see Sir Charles in a video game ever since Barkley Shut Up and Jam! hit Sega, his presence is a welcome addition to the basketball video game scene.