The Usefulness of a Starlin Castro Bobblehead

Share All sharing options for: The Usefulness of a Starlin Castro Bobblehead

I picked up my Bobblehead Jeff two-and-a-half-months ago and things had been going swimmingly. I'd type away on the laptop and he'd be there, watching intently over every word. "How's that one, Bobblehead, Jeff? I really knocked it out of the park with that sentence, didn't I?" He'd nod his head. But recently, I'd noticed a change. Bobblehead Jeff was no longer thrilled with what I wrote. He'd just stand there, head atilt, lost in thought. I tried coaxing agreement out of him and got nothing. At my lowest point, I was reduced to nudging the front of the desk to gain his approval. I repeatedly asked him if everything was OK, he nodded, but I could see the vacancy in his eyes. Then it dawned on me. He's probably lonely!

"Bobblehead Jeff, are you lonely?"

"Would you like a friend to keep you company?"

"Err...a teammate. Does 'teammate' sound better than 'friend?' I think it does"

"Great! I'll get that taken care of right away."

We've added Bobblehead Starlin to the mix and the two are getting along great. I think this is really going to be beneficial for all three of us. I've learned so much already, and even worked up the courage to tell my doctor I was off the medication. As was the case with Bobblehead Jeff, Bobblehead Starlin if more useful than your average bobblehead. He helps out around the house and, if you're lucky, may just save your marriage. Here is a sample of some of the wonderful gifts Bobblehead Starlin can provide to your household. 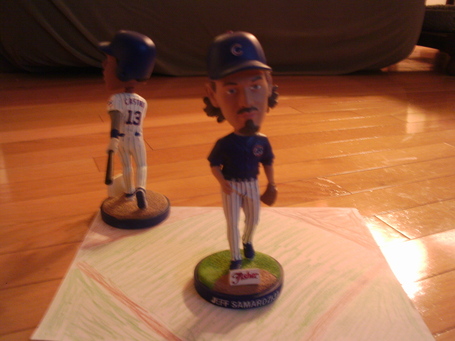 Old Jokes - "Freedom is not worth having if it does not include the freedom to make mistakes." Mahatma Gandhi said that in reference to the life of every freelancing young shortstop. Bobblehead Starlin is more than happy to relive perhaps the most embarrassing moment of his young career to achieve your outdated sense of humor. Simply grab your Bobblehead Jeff or like-minded pitcher and prepare for...wait...WHAT DO WE HAVE HERE? A Dominican shortstop with is back turned to the pitch? EGREGRIOUS! Bobby Valentine understands that young players are going to make mistakes, but Bobblehead Starlin was clearly looking for his glove, panicked, and brought his bat instead. Inexcusable, regardless of age. Back in his day, the only reason you would bring a bat on to the field is if you planned to bash the opposing pitcher over the head with it. That was when guys played the game the right way, so Valentine wouldn't expect you to know anything about that. 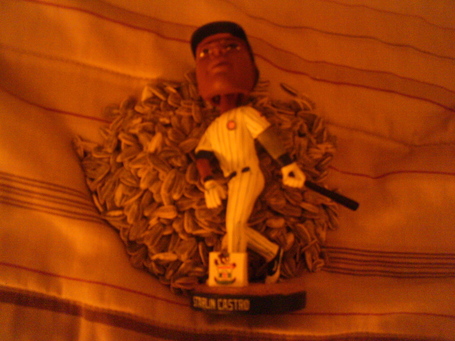 Nutritional Value - Some players sign their first big-league contract, hit the Currency Exchange, and sleep in a pile of money that night. Others hit the the strip club, toss their stacks in the air, and then quickly pick them up because they want to see what it feels like. Bobblehead Starlin was much more responsible with his money. He bought 50 thousand dollars worth of sunflower seeds, which should last him about two seasons. You may accidentally walk in on him rolling through a pile of seeds. You're going to hear some strange noises. Ignore them, shut the door behind you, and give him his privacy.

The seeds are not simply a warped sexual fantasy, no. Bobblehead Starlin knows you feed the kids McDonald's too often. It's quick, and easy, and who has the time to cook anymore? Well, under Bobblehead Starlin's watch, he's never going to feed your kids any of that crap. They can have some seeds, and he'll even crack the seeds for them if swallow seeds/spit shells proves to be too difficult a concept for their adolescent brains to grasp. 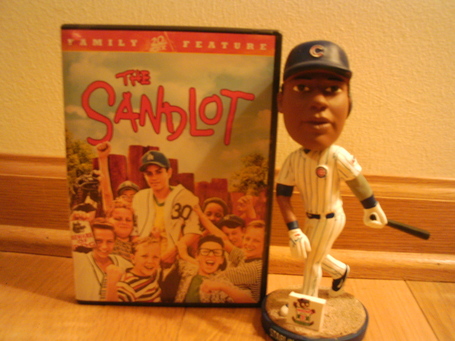 Movie Night - Bobblehead Starlin gets it. You and your spouse haven't had sex in three-and-a-half months. It happens. He's not judging or placing blame on either of you. He is here to help, though, with the only way he knows how - baseball. Not real baseball. It's already dark out and bed time is in two hours. Bobblehead Starlin is capable of popping in a DVD and that DVD will almost always be The Sandlot. It's his favorite movie. He knows all the lines, but will be sure not to recite them before they happen because no one likes that asshole. The kids are going to have questions because, other than Capri Sun, questions are a kid's favorite thing. Was Babe Ruth really as good as they say he is? Is James Earl Jones really blind? Bobblehead Starlin has the answers, and if he doesn't, he just nods his head and smiles. 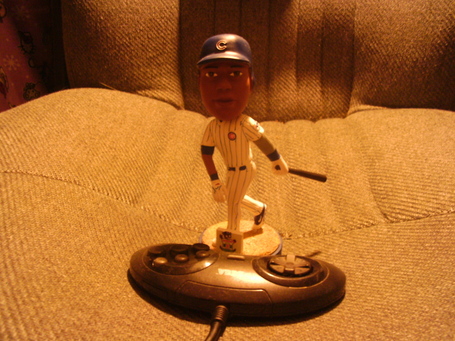 SAY GUHHHHH - Sometimes the kids will not sit through a movie because not every movie can be about talking fishes. In these instances, Bobblehead Starlin pulls out the video games. Problem is, you're not going to spring for one of those fancy X-Bots or P.S. Threes. The kids don't know how to take care of anything properly. You're already having nightmares about a pile of scratched up $60 games scattered across their bedroom floor. So you bought them a used Sega Genesis instead. They were initially confused as to what you had put in front of them, and then realized these primitive games were easy compared to what they were used to. You played with them a few times and struggled whenever you had to press two buttons at once. So Bobblehead Starlin fills in where you can't. In fact, NBA Jam proved to be instrumental in his learning of the English language. Bryan LaHair is sick and tired of hearing "Boomshakalaka" in the dugout. 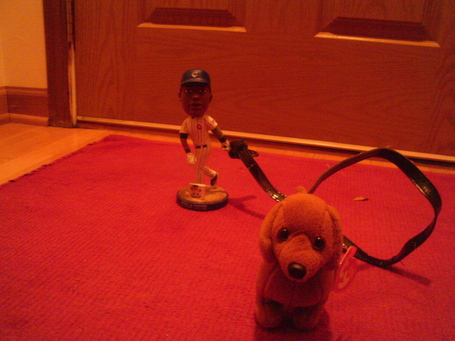 Walk The Dog - This one will not go as planned. Chances are your dog is not a Dachshund, proportionally sized to Bobblehead Starlin, and made of cotton balls. If your dog fits all three criterion, then you should be fine. If not, your dog is going to drag him around. Now, this can be funny, especially watching his head bobble while being swung across the yard, but you'll soon regret it when your dog is off the leash, out the gate, and causing havoc through out the neighborhood. Also, Bobblehead Starlin refuses to pick up dog crap. He just won't do it. You're going to receive an ordinance violation from your city and those are expensive and annoying as shit.