Share All sharing options for: The REAL Reason Ryan Dempster Was Not Traded to the Atlanta Braves

Contrary to published reports, Ryan Dempster, the Cubs' 35-year-old right-hander, was willing to waive his 10-5 veto rights and become a member of the Atlanta Braves, my sources tell me. Citing his appreciation for the "Twerk Team" YouTube videos and Gladys Knight's Chicken & Waffles, Dempster had warmed up to the idea of playing in a city known for its passive interest in all hometown sports. Dempster initially had his sights set on the Dodgers, according to an unnamed source. He'd been working on a Vin Scully impression for a "good 3 or 4 years" and was anxious to unveil the impression to Vin himself. Dempster is still reportedly distraught over never performing for Harry Caray before his death. He didn't want the same to happen with Vin.

The details become a bit murky from here, but I do have confirmation that, despite a scheduled Wednesday morning start in Pittsburgh, Dempster boarded a flight to Atlanta Tuesday night. He intended to meet with Braves' president John Schuerholz and general manager Frank Wren to express his gratitude for their interest.

"Absolutely not," Wren said via phone interview when asked if players typically meet with the other team's management before a trade has been agreed upon. "But we know Ryan is kind of a weird guy, so we just rolled with it. We were hoping we could finalize everything that night and just send him on a short flight to Miami to pitch Wednesday."

"I saw Demp leave with a big Kohl's bag full of stuff," a Cubs player told me speaking under the condition of anonymity. "I mean, it's not unusual for him to carry around a big bag of strange stuff, for the jokes and whatnot. I had no idea he was flying to Atlanta because he didn't bring any of his baseball gear with him."

Added the player, "Are they gonna trade me too? Please tell me you've heard something."

Dempster met with Wren and Schuerholz in a Buckhead mansion, somewhere in the neighborhood of where T.I. and Allen Iverson live. The mansion was painted all brown, inside and out. Even the toilet water was brown! Dempster held onto his plastic bag as he entered the home. A marble staircase and a naked statue of the the old Atlanta Braves logo were the first things he saw.

The three men sat down in a large room. Immediately after sitting down, Dempster asked to be excused. He left with his bag and asked for the nearest bathroom.

"Take a left and walk straight," Schuerholz replied. "It should take you about 20 minutes to get there."

Dempster returned an hour later. He knocked on the door, but refused to open it, only saying, "It's a surprise."

"Ask me if I would like to join the Atlanta Braves organization," Dempster shouted from behind the door.

"Ask me if I would like to join the Atlanta Braves organization."

"What is the meaning of all this?"

Desperate for Dempster's services, Wren caved, "Ryan, would you like to join the Atlanta Braves organization?"

The door flew open and to the horror of Schuerholz and Wren, this is what they saw and heard: 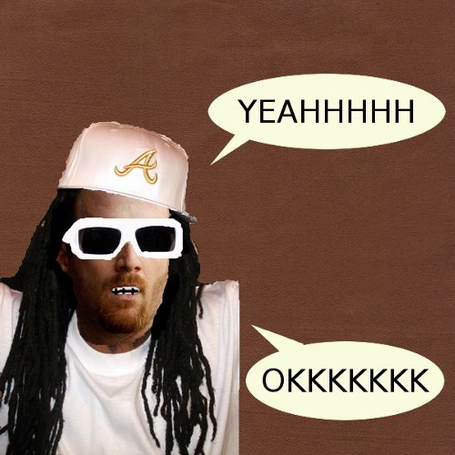 "What the...take that regalia off this INSTANT."

"You most certainly did bad. What in the hell did you think THAT would accomplish."

"I just wanted to do an impression for you guys. I know Lil' Jon is one of the most popular representatives of your franchise."

"Little Jon is in no way affiliated with our franchise."

"Well I sure feel dumb," Dempster said as he removed the wig and the grill from his mouth. "I'll do anything to make it up."

"That won't be necessary," sniped a befuddled Schuerholz. "The trade is off. OFF, I SAY!"

"The trade is off," Wren confirmed.

Dempster left the mansion, practically in tears. His first big audition, and he'd bombed. If he wasn't cut out for Atlanta, he surely wasn't cut out for LA. Maybe he could try and write a screenplay? Yeah, that's what he'd do. On his walk down the three-mile driveway, Dempster was invited to a party being thrown by one of the Housewives of Atlanta. He initially declined, before being convinced to join. He took down at least 10 shots of Nuvo. They appreciated his Lil' Jon impression. These were the people he was trying to impress, he thought. Screw the bigwigs in their fancy suits. They don't know real comedy anyway.

As part of their agreement, Dempster has continued to make himself seem like a waffling asshole. He told the Braves' front office he would make it appear as if the deal fell through because he was unwilling to waive his 10-5 veto rights. And here we are. A Cubs franchise now forced to accept a lesser offer, all because Ryan Dempster thought resurrecting a 9-year-old joke was a good idea.