The 2012 Tour de France enters the final the day, starting in Rambouillet and ending in the heart of Paris. Stage 20 kicks off in the morning hours in America, but at just 2:10 p.m. local time, and will feature Bradley Wiggins attempting to defend his 3 minutes, 21 seconds lead over fellow Brit Christopher Froome.

Here's a look at Stage 20, courtesy of LeTour.com: 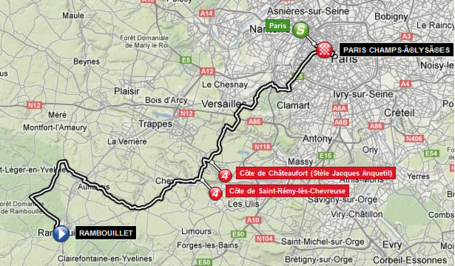 The final leg of the 2012 Tour de France stretches 120 kilometers over largely level terrain and with a generally straight run for the final leg. Radioshack-Nissan currently owns the lead among the team classifications, but Sky Procycling trails by only 6 minutes, 3 seconds.

Here is a look at the TV coverage schedule:

For more on the Tour de France, please be sure to check out cycling blog Podium Cafe and SB Nation Chicago for all the latest news and updates. More coverage can be found in SB Nation's Tour de France StoryStream.