Share All sharing options for: Captain Kirk Hinrich Encounters Trouble Aboard His Ship

The setting is a dark room lit by a single candle. Above the desk is a framed photograph of six championship trophies, but not visible due to the darkness. GARPAX confidently sits behind the desk. He is a single body with two heads. The two heads talk to each other. CAPTAIN KIRK enters. He is wearing his game-worn goggles and a Converse track jacket. He is sweating profusely for reasons unknown. Is he arriving from a recently concluded game of pickup basketball? Or perhaps his nerves have gotten the better of him? The sweat is an unimportant detail anyway.

GARPAX: Let's discuss the terms of a contract. Where is your agent?

CAPTAIN KIRK: We both want this. He'll only complicate things.

GARPAX: How about 2-years, 6-million?

GARPAX: Not the best negotiator, is he?

GARPAX: Maybe he wants to play for a championship-caliber team.

[GARPAX lets out a roaring laugh]

GARPAX: Shit, we haven't introduced him to the rest of the crew.

[GARPAX opens the office door and yells for CAPTAIN KIRK to return. He does]

GARPAX: In our haste, we forgot to introduce you to your shipmates. Some of them you will recognize. We've assembled the finest crew money can buy.

First, we have CHIEF MATE THIBS. Beware, he has a tendency to try and take the reins. Remember that you have the final say on all matters concerning the voyage. Do NOT let him easily overrule you.

BOATSWAIN RIP keeps his finger on the pulse of the ship's workers. He has shown an uncanny ability to rally the workers around him and insight a mutiny. Do not worry. We assure your position as Captain.

ENGINEER JOAKIM is in charge of maintaining the engineering equipment. We hired him because of his motor.

STEWARD CARLOS bosses others around. Tells them where to be, what assignment they missed, and how they could have handled it better. Of course, he does not follow his own advice, and his position is rendered almost completely useless.

ABLE SEAMAN LUOL does a little bit of everything aboard the ship. He's the glue that keeps the crew together, if you will.

CHEF JIMMY cannot cook a lick but can recite any Wu-Tang lyric on command. For this reason, we believe him to be an integral member of the crew, possibly the most integral besides yourself.

It's a fine crew, CAPTAIN KIRK. We have supreme confidence in your ability to right the ship. We've financed the construction of our finest ship yet, the Luxuria Taxe, and place her in your hands. Treat her like the queen that she is. Bon Voyage! 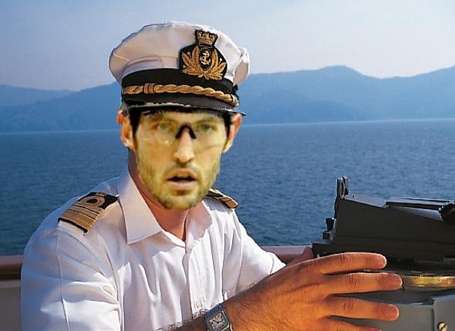 CAPTAIN KIRK: Men, we meet, or should I say, reunite today under somewhat dubious circumstances. Your former Captain has been struck a fierce blow...

CHIEF MATE THIBS: Silly me. I was under the impression I was Captain all this time.

CAPTAIN KIRK: ...Anyway, I'm fully committed to the cause and more than capable of navigating us through a successful voyage...

CHIEF MATE THIBS: Where is this voyage headed anyway? We've been stranded here for months, kept in the dark about the future of this ship. I hate these mother fuckers more than I did before we set sail the first time.

BOATSWAIN RIP: Yes, a championship. I have very little time left and need another championship to cement my status as one of the most consistently good boatswains of my era.

ABLE SEAMAN LUOL: I thought we were aiming for a run at the Eastern Conference Finals. You know, good run, try not to die playing all 48 minutes of every regular season and postseason game.

STEWARD CARLOS: It's not about where we finish. We just need to set sail, do the best we can, and collect our money. That's all that matters, yo.

ENGINEER JOAKIM: I thought we wanted to improve from last year. Make it to the second round of the playoffs and gear up for 2014.

CHEF JIMMY: Cash rules everything around me. CREAM. Get the money. Dollar dollar bill, ya'll. We should just tank.

CAPTAIN KIRK: Have you no faith?!?! Have you given up so easily? It was just last year that you believed yourselves to be championship contenders. What's changed? [pauses] Don't answer that.

[Many weeks have passes. The crew is restless and dispirited after making up less ground than they anticipated. CAPTAIN KIRK lets them roam most of the time. They respect him but miss their former Captain]

BOATSWAIN RIP: [frantically approaching CAPTAIN KIRK, who is steering the ship] Captain, My Captain! We need to dispose of some cargo. The ship is carrying a dangerous amount of weight!

CAPTAIN KIRK: Where might the dead weight be, Boatswain Rip?

BOATSWAIN RIP: Well, Captain, SECOND MATE DERRICK has been dead for months. We've left him on the deck, unsure of the proper course of action. I come to you in search of an answer. 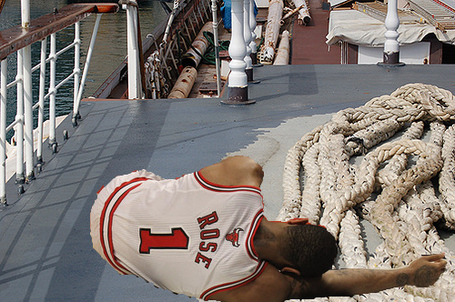 STEWARD CARLOS: But he's not moving.

CHIEF MATE THIBS: Of course he isn't moving you imbecile. We treated him with the only medicine available to us – copious amounts of rum. He's passed out from all of the drink we forced down his gullet. To throw him overboard would effectively kill our mission.

CAPTAIN KIRK: I'll give him 'til January. If he isn't contributing by then, we'll be forced to throw him overboard.

CHIEF MATE THIBS: [under his breath] Who's commissioning this voyage anyway?

CHIEF MATE THIBS: To hell with him and to hell with King Jerry. He was never serious about funding our mission.

CAPTAIN KIRK: How dare you speak with such a loose tongue.

CHIEF MATE THIBS: It's true! ALL OF IT! I still haven't received a paycheck for this voyage.

ABLE SEAMAN LUOL: Keep talking. I could use the rest.

CHIEF MATE THIBS: I don't care anymore. We were doomed from the beginning, I tell ya. I'm not afraid to speak out. I'll land somewhere else and take a rag-tag group to the playoffs.

CAPTAIN KIRK: I smell a mutineer! Get him, boys.

[The crew members dutifully chase after CHIEF MATE THIBS, fully prepared to dispose of him. He alludes them just long enough bring about a thundering crash. The crew, including CAPTAIN KIRK had become so distracted with CHIEF MATE THIBS that they lose course of the ship and ram into an iceberg. Water begins to flood onto the deck as the ship slowly sinks. Each member piles onto the lifeboat, including CAPTAIN KIRK, who "fell onto it," and couldn't possibly have stayed with the ship]

[As the Luxuria Taxe sinks into the depths of the ocean, SECOND MATE DERRICK regains consciousness. He watches as his shipmates and new Captain paddle off in the lifeboat. He takes a look around and realizes his destiny. He proudly stands up, says a quick prayer, and goes down with the ship – HIS ship]