Some Ideas Rejected By the Cubs' Marketing Department

Share All sharing options for: Some Ideas Rejected By the Cubs' Marketing Department

We're almost a week into June, and the Cubs are sitting 12.5 games out of first in a wide-open division - wide-open to every team but them. All those good vibes emanating from the sweep of the Padres have disappeared after they promptly lost all four to the pitching-crazed Giants. There's nothing like playing any of the 28 teams better than you to tip the Confidence Scale back to 0. The popular C-U-B-S acronym can officially be adjusted to read "Completely Useless Before September." We'll almost certainly see someone holding this sign up in Milwaukee tonight.

The summer months are normally a time for an attendance spike, as the weather warms up and kids are let out of school. But with ticket prices as high as they are, parents will think twice about pulling their kids away from their sexting and their video games to attend a Cubs game. Facing dwindling attendance numbers last year, the Cubs offered some embarrassing bleacher promotions to try and attract fans. Free XXXXXL T-shirts fit no one and served mostly as towels for the fans who decided to hit up North Avenue Beach after the game. Three-dollar beers seemed like a good idea until fans realized the beer was still Old Style, and the three dollar price tag was still entirely too high.

Like any true fan, I wanted to do whatever I could to help the Cubs combat their impending attendance woes. I contacted their marketing department and bounced a few ideas off them, all of which fell on deaf ears. Nothing serious, just a few things I'd been kicking around for the last few weeks. I thought I'd share these ideas with you, with the hope you may give them the time of day. They seemed fairly reasonable to me.

MORE BOBBLEHEADS. There's something about bobbleheads that make people scream, "I have to have it! I'll love it 'til the day that I die!" We've also discussed the overlooked usefulness of a bobblehead such as Jeff Samardzija. The Cubs are keeping the bobblehead train rolling. David DeJesus will be unveiled later this month, and Starlin Castro in August. Castro is a no-brainer, but I take issue with DeJesus. In order to pull off a successful Bobblehead Day, the represented player needs to either be a popular player or a goofy looking player, ideally both.

That is why I nominate either Tony Campana or Reed Johnson. Both inexplicably fan favorites. Both goofy-looking as fuck. I tried to talk them into Campana first: We're innovators here within the Cubs organization. We want to put together a promotion heard 'round the league. Imagine being the first ever to pull off a bobblehead whose head is disproportionately SMALLER than its body. That's exactly what we'd be doing if we replicate Campana to a tee. We'd be branded as forward thinkers for the rest of our lives. I pitched Johnson less enthusiastically, citing his billy-goat beard as the selling point. Either would make for a better promotion than DeJesus. He's too normal looking and the casual Cubs fan has never heard of him.

HONESTY. The Cubs aren't going to lower ticket prices to a sum worth paying to see a last-place ballclub. We know this. So it's time to start being honest about this team. By "honesty," I mean tricking fans into paying for less quality. Take Qdoba Mexican Grill, a new partner of the Cubs. They've been forthright about their product. 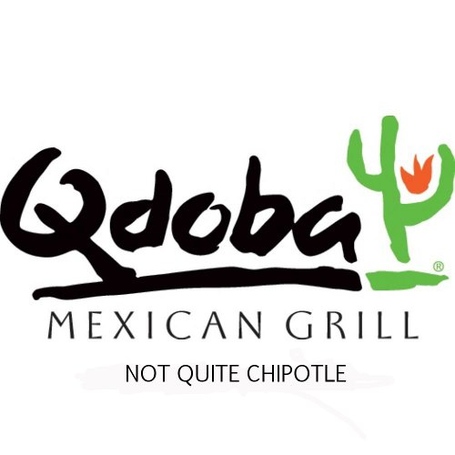 You like burritos. We like burritos. It's not important that we don't have the best burritos because you've already stepped foot into our establishment and aren't about to walk out now. Now apply this to the Cubs: 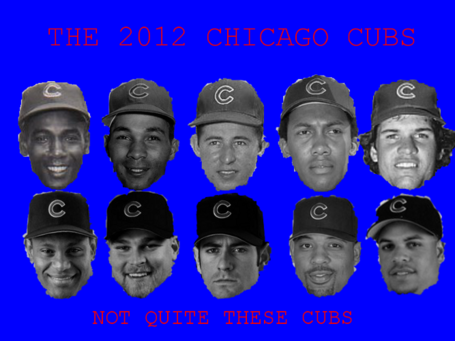 Fans give themselves millions of imaginary points for continuing to support a team when they're bad. We're going to take advantage of this twisted mentality. Think of the good times! These players aren't around anymore, but eventually we'll have some more good ones. Stop worrying about what we could be and start appreciating what we are. You signed your life over to this team a long time ago.

THE ADVANTAGES OF LOSING. What's the one complaint always slung at Major League Baseball? The games are sooooo slow and boring. We make no guarantees concerning the "boring" part, but we absolutely guarantee your Cubs games will not move slowly. The Cubs do their part by only tallying five or six hits and maybe plating a run or two. That's it. Sometimes the other team does not comply and insists on scoring something like 10 unnecessary runs when they only need 3. Nevertheless, when the other team doesn't go crazy overboard with the offense, we've been unbelievable at keeping our games under 3 hours.

We know you have things to do, people to see, television to watch. The last thing you want to do is spend more than three hours of your day watching the Cubs lose. We do our part to ensure you can get on with your life. We recognize how depressing it is for Red Sox fans to sit around for 4 and-a-half hours to watch their team lose a 9-inning ballgame. Rest assured, we'll try and make this as quick and painless as your first colonoscopy.

THEY'RE JUST LIKE US. In the fifth inning of Monday's game against the Giants, Starlin Castro forgot how many out there were, and began his run into the dugout after the second out. To make matters worse, he recorded the second out and failed to make the throw to try and turn two. To be fair, he probably wouldn't have gotten the runner at first anyway, but the mistake looked bad, especially considering then-announcer Bobby Valentine famously broke down Castro's lack of focus in the middle of a game against the Cardinals last year. Cubs fans were angry and clamored for swift disciplinary action - everything ranging from a spanking to no video games for a week.

I wanted to get up out of my seat and start calling him awful names as well. Until I realized I wasn't even paying attention to the game. There were a couple of birds chirping outside of my window and I was checking them out. They were interesting. Just chirping away. Those birds. And that's when it hit me: Starlin Castro is just like us! He can't stand to pay attention to this shit either. Rather than crucify him, we should embrace our sameness. Athletes and their teams are always trying to sell us on how normal their lives are. They're just like us except they perform their higher-paying jobs on a grander stage. We've finally found an instance where this is true. Starlin Castro is just like you and me, minus the sexual assault allegations.