The conspiracy theorists were out in full force after the New Orleans Hornets moved up to win the 2012 NBA Draft lottery with just a 13 percent chance of doing so. Draft history is littered with seemingly shady examples of lottery fraud, from the New York Knicks sneaking up to win the 1983 lottery to grab Georgetown center Patrick Ewing to our own Chicago Bulls cashing in on a 1.7 percent chance to snag hometown hero Derrick Rose in 2008. While the speculation is likely all overblown, the Hornets rise to grab no-brainer top pick Anthony Davis from the Kentucky Wildcats was almost too easy for conspiracists.

Last season started with the NBA blocking a trade that would have sent Hornets point guard Chris Paul to the Lakers for a bevy of draft picks and veterans. It was the trade New Orleans wanted to make. The team was also sold to Saints owner Tom Benson midway through the year, finally freeing them from being owned by the league. There was a lot of stuff at play here, and the league seemingly could have had the Hornets' best interests in mind.

But forget the Hornets. According to a funny slip-up today in the Chicago Tribune, Benson's other team holds the top pick tonight. That's right: the NFL's New Orleans Saints. 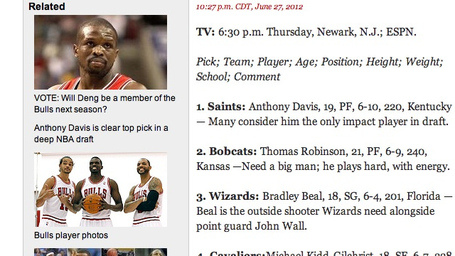