Justin Verlander Has No-Hit the Cubs Through 0 IP

Share All sharing options for: Justin Verlander Has No-Hit the Cubs Through 0 IP

No-hitter Alert: Verlander against the Cubs this afternoon.

I would never claim to be the mouthpiece of team's fanbase, especially the Cubs, but I think even the least cynical of us had a similar idea to ESPN analyst Buster Olney's tongue-in-cheek suggestion. Justin Verlander, winless in his last four starts, has not recorded a win since having his no-hit bid broken up after 8.1 innings against the Pirates on May 18th. We're in prime no-hitter territory this afternoon because he's Justin Verlander and he's capable of throwing a no-hitter every time he takes the mound. The Cubs are one of the least patient teams in baseball and trying to hit against Verlander down 0-2 is worthy of a Surgeon General's warning.

That being said, predicting a no-hitter is a fool's errand. Tony Campana will probably slap a dribbler down the third base line to lead off the game. Until that happens, I'm rooting, yes ROOTING for the Cubs to be no-hit. I long ago resigned to the fact I will not see one in person. So the next best thing is to see one on television from the 1st out to the 27th. This is a feeling not at all foreign to White Sox fans, who have become accustomed to witnessing a perfect game every few years. Many of us Cubs fans, however, have never even seen a no-hitter on TV. I missed Carlos Zambrano's in 2008 and felt terrible about it afterwards. The next closest time was when Ted Lilly took a no-hitter into the 9th against the Sox in 2010 and still almost lost the game!

At this point, Cubs losses are beneficial. Might as well gun for that No. 1 pick. One more loss couldn't hurt, especially if it means we get to see a historic achievement. 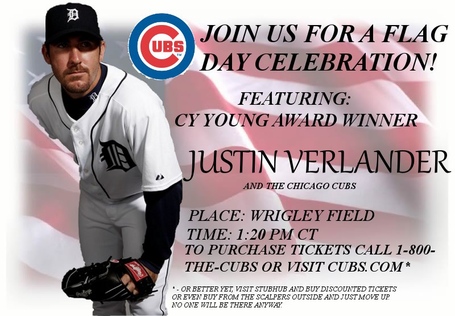 This is how I would bill this afternoon's game. Make it the Flag Day celebration you always dreamed of.