Share All sharing options for: Anthony Davis Sports A Hornets Jersey On Cover Of SLAM Magazine

We like Anthony Davis. If you've been hanging around SB Nation Chicago the last few months, you've probably figured this out by now.

Davis is the Chicago native who keyed Kentucky's National Championship run as a freshman last season. The highly-dexterous shot-blocking wizard is also the 100 percent, money-in-the-bank No. 1 overall pick in the 2012 NBA Draft. The only question left was where Davis would play, and the New Orleans Hornets were awarded the rights to his services after winning the draft lottery earlier this week.

We have a first look at Davis in his New Orleans uniform, on the cover of SLAM Magazine, after the jump... 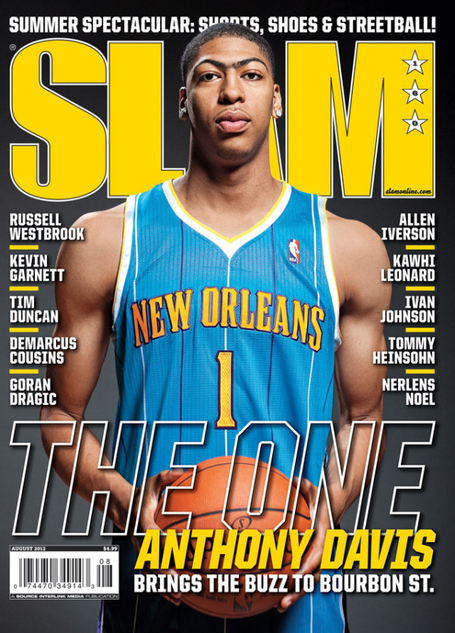 That Davis would already sport the jersey so early in the draft process is awesome in our opinion; after all, New Orleans could, conceivably, still select Michael Kidd-Gilchrist or Thomas Robinson or Bradley Beal with the first pick. We all know the selection of Davis is a formality, though, so props to all involved for dropping the pretension and cutting to the chase.

While New Orleans didn't crack the top-five in our pre-lotto Davis favoritism post, we still think it's a nice landing spot for the Chicago-bred defensive czar. Anthony Davis is going to look pretty funny in those Mardi Gras uniforms, though he'll rock the threads better than Chris Kamen. So, that's something?