Things are kind of bleak right now in Chicago sports.

Derrick Rose's ACL isn't walking through that door. Marian Hossa is barely walking all together. The Bears are stuck in that post-draft/pre-training camp purgatory. White Sox pitcher Phil Humber just got shelled (again). And the Cubs are the Cubs.

That's why these recent photos of Patrick Kane drunk at the University of Wisconsin Cinco de Mayo matter so much.

Sports are usually fun because they serve as a form of pure escapism. Seeing super-humans at the peak of their powers can help all of us appreciate the spectacle of mankind. But lately, we've seen nothing but the opposite. Hell, Wilbon thinks we're straight-up cursed. When Derrick Rose tore his ACL, we realized that he too is human. Mortality isn't always a fun thing to face when you're looking to kill a few lazy hours on a Sunday afternoon. 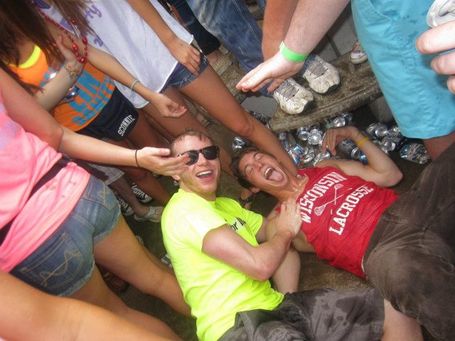 While this likely raises cliche issues like "why isn't he working on his game?!" or "at what point will this have gone too far?" I recommend simply putting it out of your mind. We have way too many other things to worry about at this juncture.

Here is a happy, healthy athlete, (probably) drunk, rocking a bright shirt and shades. And that's it. No ambulance, no hospital visits, no surgeries, no heart-breaking losses. Just a man in the moment.

It's something we could use a little more of these days. It'll get better, Chi city. It has to.

Bobby Loesch is a weekly contributor to SBN Chicago. He can be reached at bobbyloesch [at] gmail.com. Follow him on Twitter @bobbystompy.

Blackhawks Offseason: Marian Hossa Should Be Ready For Training Camp