Share All sharing options for: How Magglio Ordóñez Became A Diacritical Symbol

Magglio Ordóñez will retire on Sunday. The former Chicago White Sox and Detroit Tigers crusher will retire in a ceremony at Comerica Park, his last American baseball home and the place that paid him best. It's also the scene of his 2007 masterwork, when he led the American League in batting average and was nearly selected as the American League's Most Popular Hitter Playing for a Competitive Franchise.

Magglio and I have a unique one-sided bond in that I named him.

I also didn't craft the wildly inventive nickname "Maggs". I'm sure no one came up with that. Instead, every Stateside player immediately know how to shorten his name to scrub the foreignness right off him.

But bless Bud Selig. (And this will be the only time I say this in 2012, so feel free to use the color ink cartridge when printing this piece out, Bud. Or Bud's assistant that isn't scared of the electric voodoo box.) He pushed for uniforms to more accurately reflect players' names instead of the scrubbed versions around 2005-2006, meaning we started to see ñ, é, and other exotic letter modifications showing up on the backs of young men proud of their heritages.

I found myself with blogger friends in the absolute top row of the nosebleeds at Comerica Park for a Tigers game in 2006, so distant that I simply assumed the game was going on under us and that I hadn't accidentally turned to stare at Tiger Stadium for three hours. Therefore, the utter lack of game distraction led to plenty of recreational drinking and baseball-related chatter.

Staring at the backs of nearly every fan in the park, I noticed the mix of Maggs (ugh) jerseys, some sporting the new diacritical look and others from his first season with the club. I turned to my friends, fellow bloggers and baseball aficionados, and declared that I had the perfect nickname for Ordóñez.

(Aside: I have an incredibly annoying desire to bring ridiculous nicknames back to sports. This is why Tim Duncan will forever be known as The Merlin Wall in my home. It's okay; I asked him for permission.)

Magglio Ordóñez, I decreed, shall be called The Big Tilde forthwith. You see, I continued, he is big. And his jersey name now has a tilde in it. Or returned to it. You see. This is brilliant. I am very brilliant for having discovered this, probably because we are sitting in very thin air right now, making the $10 beer more effective.

Except my friends did not find my idea abhorrent. They bought in whole hog. We dragged that nickname back down 194 flights of stairs and back out into the world using our magic blogging powers. SBNation's own Matt Sussman, Chris Driver of Chris Driver fame, and I eventually started a blog all about The Big Tilde, extolling his legend and using our powers for mostly good to cover the Tigers via WordPress for two years.

Matt documented the time Jason Grilli's dad brought the thunder down on Sussman himself. I called out the time Carlos Quentin stole a home run from The Big Tilde while pointing at my crotch. Chris wrote poetry.

The site petered out eventually, as do all goofs brought to scale. We slipped the nickname into the blogging lexicon on Deadspin, SportsByBROOKS, and MLB's own web site, mostly because some of us worked for the former sites. We shared our joy in watching Ordóñez play and in the tiny cult we pulled together around our Tildenterpretation. And then we were done. And now he is done. And I will miss both.

Coda: on an early April Fox Saturday baseball broadcast in 2008, this happened: 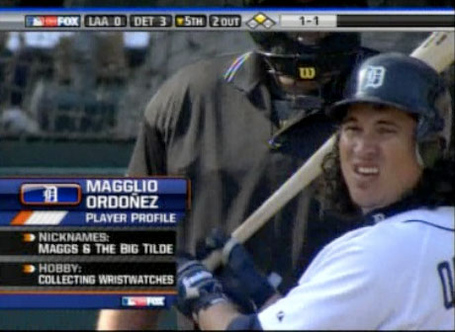 I firmly believe a Fox Sports intern saw the nickname notation in Wikipedia and mindlessly dumped it into the Chryon. Therefore, I don't recommend you rush out to buy The Big Tilde a gold watch for his retirement party. I'm not sure that's true, either.