The Usefulness of a Jeff Samardzija Bobblehead

Share All sharing options for: The Usefulness of a Jeff Samardzija Bobblehead

Jeff Samardzija, with quite a bit of help from reliever Shawn Camp, held on to defeat the Padres 5-3 on Tuesday. The Cubs have now won 2 of their last 14, or as I like to say, 2 of their last 2. The Cubs gave away Jeff Samardzija bobbleheads to the first 10,000 fans through the gate. The giveaway, as do all bobblehead giveaways, raises the question: What does one do with a bobblehead? Sure, they're fun to look at and shake around for five minutes. Then what? They sit idly on a desk. They go back into the box and into the closet. They're repackaged as a gift for someone you only slightly care about. Not this Jeff Samardzija bobblehead. He's invaluable around the house and here's why. 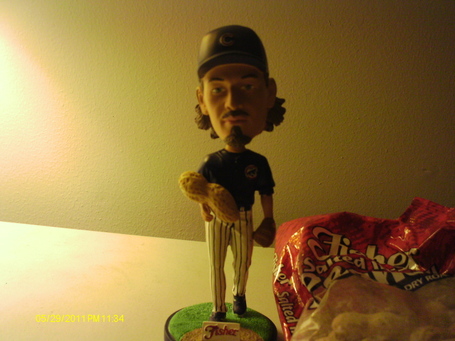 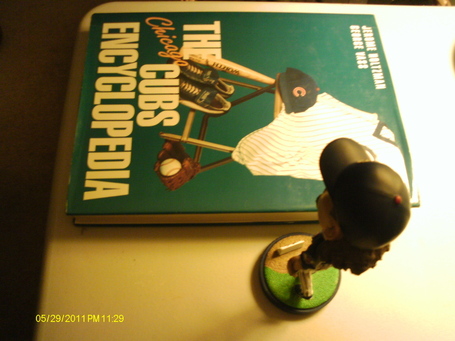 Nighttime Reader. Read me a scary story, dad. Daddy's trying to catch up on Mad Men and polish off this 6-pack of Bud Lite before midnight, princess. With Bobblehead Jeff, you'll never have this conversation again. He's programmed to read the benchmark of spooky stories: The Chicago Cubs Encyclopedia. The encyclopedia spans from the franchise's National League debut in 1876 all the way up to the 1996 season. As funny as this may sound, the book ends before one of the most successful periods in franchise history. Scary stories, indeed. For added effect, turn off all the lights and shine a flashlight under Bobblehead Jeff's chin as he recites the tales of Cubs years past. He's the crypt keeper! 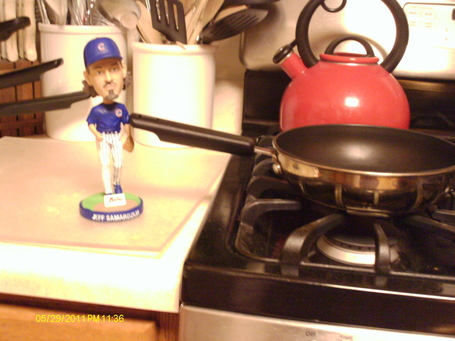 Cooking Timer. No, he's not going to cook for you, but at least give him some credit for navigating his way up the 4-foot kitchen counter. Not the easiest thing in the world for Bobblehead Jeff. He won't cook, but he'll be happy to watch the food for you.

"Is everything looking good in there, Bobblehead Jeff?"

"Are you sure? I think I smell something burning."

"Jesus, the smoke detector is going off. Should I grab the fire extinguisher?" 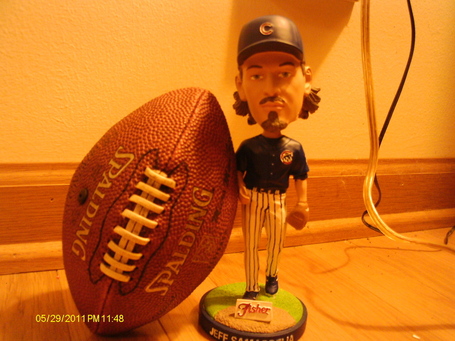 All-Time QB. You know all about Jeff's days as an All-American receiver at Notre Dame. It's only brought up every five minutes. Bobblehead Jeff, unfortunately, is not blessed with the same size. Here he is next to a mini football, and it's as big has him. For this reason, Bobblehead Jeff does not catch passes like real Jeff used to. Don't even attempt to throw the ball to him. You're just going to knock him over and embarrass the both of you when you're forced to help him up. Bobblehead Jeff is all-time quarterback, best used when he's playing catch with an infant who cannot throw the ball back, or a small dog who drops the ball at his feet. 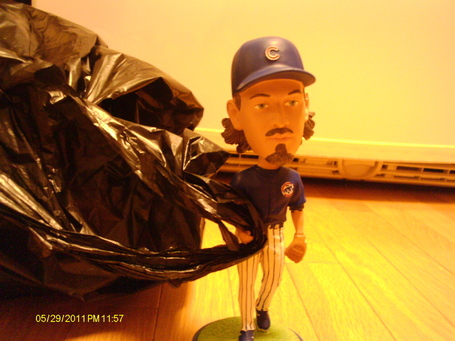 Garbage Collector. As is the case in most American households, if there is not an eight-year old present, the trash goes uncollected. And unlike your young child, Bobblehead Jeff does not throw a tantrum when asked to take the garbage out. He simply nods furiously at your request and gets to work. The trash is heavy and plentiful, so it may take Bobblehead Jeff awhile. Unable to pick up the bag, he is forced to drag it across the floor. Better than doing it yourself, though. Am I right?