Share All sharing options for: The Bryan LaHair Infomercial

Bryan LaHair hit his sixth home run of the year in the 2nd inning of the Cubs' eventual 3-1 win yesterday in Cincinnati. He has now accounted for over half of the Cubs' home runs this year. Impressive in the sense that six home runs is good for a 4th place tie with a litany of other guys, and misleading because the Cubs have hit a major-league-low eleven home runs. Regardless, no one knows who Bryan LaHair is, not even the casual fans of his own team. He's a 29-year-old career minor leaguer who is getting his first chance at playing everyday, and making the most of that chance. But hacking away on a last place club is not the best situation to draw recognition.

LaHair hatched out a plan to build up his name. He wrote an autobiography and approached the legendary bankruptcy attorney, Peter Francis Geraci, about helping with promotion. Cubs fans know daytime TV better than anyone, LaHair thought. Who better to seek the advice of than the Notorious PFG? Geraci was more than happy to help, for endless recurring payments, given that LaHair provided him with the proper documentation. LaHair took PFG's promotional advice to heart, and what follows is his daytime advertisement. 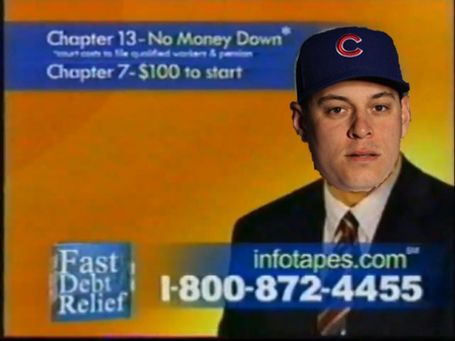 Do you feel trapped by an ever-changing Cubs roster? Find yourself scratching your head, thumbing through the media guide and wondering: who the hell is this guy?

Their latest trick is acquiring cheap, formerly well-regarded prospects for a veteran player.

A 25-man Opening Day roster now means a minimum of 10 Cubs players you have never heard of. Look away for a second and there goes the familiar face!

If your knowledge of the active roster is lacking, consider Chapter 7 or Chapter 13 of my autobiography, Bryan With a 'Y:' It's Never Too Late to Touch 'Em All. In it, you will find anecdotes dating from my time as a youngster running the rough-and-tumble Massachusetts streets, all the way up to my time as a Major Leaguer. Want to know where Dale Sveum hides the liquor? Order now. Or how about which one of my teammates showers in his swimming trunks? (hint: it's Joe Mather) All that plus my harrowing recollection of almost a decade in the minors. It's an inspirational, uplifting story you will not want to miss.

For a limited time only, call now and receive my accompanying pamphlet, You're Damn Right I Can Play Left Field, If Left Field Needs to be Played. I subtly smear the good name of Anthony Rizzo, all while making an impassioned argument for my ability to play left field. Or at least play left field better than Soriano.