Share All sharing options for: Tom Thibodeau Responds to His Critics, Part II

Editor's Note: The last time we allowed Tom Thibodeau to open up his mailbag, things went horribly wrong. Tom delved deep into his childhood and didn't answer any of the questions. We switched up the format this time around, thereby forcing him to answer specific questions. What follows are his answers, in all their unabashed glory. 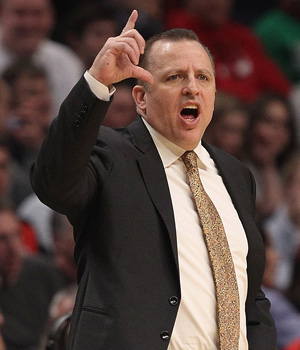 See that picture? The one up there? You probably think I'm calling a play or maybe playing Charades. You're wrong on both accounts. That symbol is for you, dear readers, inspired by my favorite band - Smash Mouth. You may have heard of them. I was listening to a little ditty called "All Star" and it starts off like this:

Somebody once told me the world is gonna roll me

I ain't the sharpest tool in the shed

She was looking kinda dumb with her finger and her thumb

And the shape of an 'L' on her forehead

I couldn't help but laugh because this is exactly how I write every mailbag. One hand typing and the other with the shape of an 'L' on my forehead. Who are these people writing to me? Who birthed them? Where did they learn to think critically and how on Earth do they have access to a computer? Give yourselves a pat on the back ( I know you will). You're losers of the highest order. Now to the questions. As always, these are actual emails, from actual readers.

Da fuck, bro? How we down 3-2 ta Pfilly? There team is ass, bro. I'm glad you didn't get a contract extenshin.

Thanks for writing in, Bruce. And holy shit! Not since Ernie Hemingway have I read such powerfully terse sentences. To soak in more of your literary genius, I visited your blog (bababulls.wordpress.com). I have to say, despite giving me an 'F' in 'Coaching,' I came away very impressed. Impressed that you could operate a Wordpress account. I wouldn't trust you to differentiate between the hot dogs and the hamburgers at a 300-Level concession stand. Good on you, Bruce. I hope your life plays out exactly like Ernie's, especially the last five minutes of his.

Why haven't we seen more of Mike James in this series? I think he can offer a nice change of pace from John Lucas III, who I'm starting to think gets off to watching himself dribble.

WHO?!?! I'm not trying to be funny by incorrectly referencing the name of a mid-2000s southern rapper. I don't know who Mike James is. Establishing a meaningful connection with your players is for coaches who are more concerned with their job security than their winning percentage. So I don't ever look a guy in the eye when he's on the bench. The next thing you know, he wants to tell me about his feelings and his home life. Take that up with the team psychologist. To answer your question, Tyler, I may consider inserting Mike James in the lineup, but I'd have to know what he looks like first.

I'm willing to forgive you for leaving Derrick in at the end of Game 1. We were fading a bit and NEEDED the victory. I cannot, however, defend your handling of Joakim Noah in Game 3. What were you thinking? He could barely walk and you still let him back in the game. You could have seriously jeopardized his career.

I'm going to take a guess and say you're a pretty young guy, Marcus. A new-school, my opinion is important because I grew up in the Facebook/Twitter era-type of guy. I bet your parents and middle school teachers said that you could accomplish anything in the world. Reach for the stars, kid. And while you're up there, take a big ol' bite out of the moon. Sheesh. How am I ever going to live with myself? Marcus from Maywood still hasn't forgiven me for putting Joakim Noah back into the game.

I want you to head over to Basketball-Reference and type in this name, Marcus: West, Jerry. That man played practically his entire career on one leg and lived to tell about it. In my day, we only needed three things to treat an ankle injury: fiberglass tape, duct tape, and Scotch tape. In that order. One wrapped over the other. If that didn't work, then we administered a cortisone shot. You either played with a little pain or worked construction. We damn sure chose the former.

I named my Fantasy Basketball team after you (Thibs in a Blanket, haha)! League Champs, holla! This was the photoshop I did for my team logo. Enjoy!

I would DEVOUR those things in a tasty mustard, BBQ, and soy sauce combo. I'd have to lock the door behind me for fear of the assistants listening in on my doggasm. Dinner is served for the next 18-hour marathon film session. That's the kind of meal I would congratulate myself for WHILE eating.

It's pretty apparent that, even with Derrick, your team wasn't going to beat the Heat. Boozer is garbage and needs to be amnestied. Rip is old. Korver can't be counted on in big situations. Deng can't create his own shot or go to his left. Omer drops the ball more often than Roy Williams. This team needs to be blown up. I'm so frustrated. We had it so good before you came to town. The best record in basketball for two straight years is nothing to be proud of, especially considering this franchise's illustrious pre and post-Jordan history. All the blame is on you, sir, for not getting the most out of your players.

Oh, I'm sorry, was there a question in there somewhere? How am I going to ask a question before you do? Two questions, now. Truth be told, Les, I admire your courage in typing those words. Never in my life would I put my name on such an abomination of the English language. I've counted six logical fallacies and I'm not even 500 words deep into your letter. Holy shit! How long is this thing? It's pretty apparent that, even with a functioning central nervous system, your brain wasn't going to form a coherent thought. I suggest one of the many over-the-counter medications that kids use recreationally nowadays. If those don't work, rat poison. Lots of it.

Hi thanks for answering my letter mr. Tom Thibed'oh. i write to u as a very guilty fan. before every game i drink a glass of milk with two ounces of ketchup mixed in. See RED! my ketchup ran out after game one and i am not able to replace it. The store is two far away to walk and i'm only 12 years old and my mom won't drive me to the store to pick up more ketchup. deep down i know i am responsible for the Bulls losing. i drank a glass of ketchup-milk before every Bulls win and now i do not and they loss. PLEASE SEND KETCHUP!!!

Now hear me out. I'm in the business of fixing things, and halftime entertainment needs to be fixed. This is what I propose. You take both announcers, the color guy is most likely a former player, and the play-by-play most likely a regular schmoe. You give the play-by-play guy a trampoline and five attempts to try and dunk over the color guy, who is standing straight up and is allowed to jump. Imagine the season-long chemistry issues that could arise if the play-by-play guy actually converted one. Tell me you wouldn't pay an extra 50 bucks for League Pass if it means you can watch Neil Funk attempt to dunk over Stacey King. You can't.

After Derrick Rose went down, I mentally checked out. I didn't eat or speak for three days, beyond telling my girlfriend it was cool if she slept with other dudes. Nothing mattered to me. I watched Easy Rider and found myself identifying with Wyatt as he approached Billy's wounded body. Derrick was Billy and the rednecks with the shotgun were Fate. We all died that night by a cruel, uncompromising hand. Inspired by the emotion of the final scene and the movie's quick-editing technique, I vowed to rewrite history. I acquired some editing software ( I know a guy, don't ask) and went to work on the Game One tape. I was able to edit out the film just before and after the injury and replace it with spliced tape from previous games. The film now plays as if the injury never occurred and the editing is so superb, my mother, who doesn't watch basketball, was not able to tell it was doctored at all. I've watched the new version of Game One three times now, each with a big smile on my face. The Bulls won 105-92 and Derrick Rose is healthy. I'm thinking about making copies and auctioning off my creation on eBay. I'm mentally ill, I know.

Yup, these are my readers.

Enjoy Game 6 and as always: I'm trying to see where y'all are coming from, but the light reflecting off of my Coach of the Year trophy is a bit blinding. See you in June, one way or another, suckas.