Scene: Glass-enclosed office high above the bustling streets of Manhattan. Jay-Z, Mikhail Prokhorov, well-dressed, creative director of an award-winning branding and marketing agency, and a few scattered yes-men and remoras sit around a table, poring over the design plans and logo illustrations for the Brooklyn Nets.

Jay-Z: "So you're telling me Nets fans from New Jersey aren't going to move to Brooklyn? I can't just relocate them to Marcy? I sorta wanna get a Target up in there as well. We can't do that either?"

M. Prokhorov: "Da, I also am confused as to why the Sean Man's demands aren't being met."

Yes Men (in unison): "Sadly sirs, we can't do that. We looked into your request for filing the area immediately around the Barclay's Center as "HOVstonia" as well, and in spite of your impassioned plea expressing that the rich have just as much a right to "imminent domain" as a municipality, HOVstonia may have to be put on the back burner...for now."

Jay-Z: "HOV doesn't plead to nobody --save for that one time in my tour bus when Memphis Bleak was eating all of the Salt and Vinegar Frito Lays-- still, alright, y'all are on notice."

Yes Men (in unison): "We understand that, but happily we have some good news. This gentleman is from a very successful branding and marketing agency and he has some good news about the Nets new logo."

M. Prokhorov: "I was wondering who the short man in suit was."

Well-dressed, creative director: "Gentleman, thank you for your time today. Following an initial meeting with Mr. Carter wherein we drilled down to the core of what the Brooklyn Nets are about..." 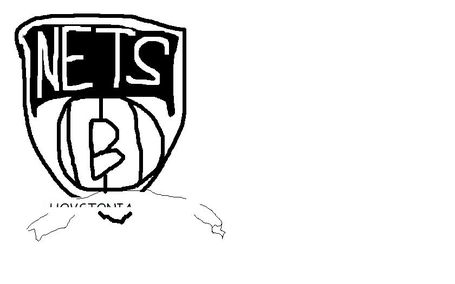 Well-dressed, creative director: "But of course! We really appreciated all of your suggestions, the visual Blueprint© you provided absolutely helped. You'll notice we stuck with the Black/White motif that represents not only the paradoxical nature of good/evil inherent to human nature, but also, the bright moments in Nets history (ABA champions, back-to-back trips to the NBA Finals) juxtaposed with the darkness that soon will shroud the team when Deron Williams leaves for Dallas. Also there's basketball with a B on it."

Jay-Z: "Y'all crazy for this one! B stands for Brooklyn, Basketball, and Beyonce. I call it the "Tri-B" or "Tribe Called Best."

Well-dressed, creative director: "Yep. exactly. Now, "On to the next one," feel me, Sean?"

[longing, impatient stare from all in room]

Well-dressed, creative director: [clears throat] "Anyway, this next piece captures the grit and "realness" of Jay-Z's earlier recordings and the "joie de vivre" that the NBA's first true hip-hop mogul brings to the home of hip-hop." 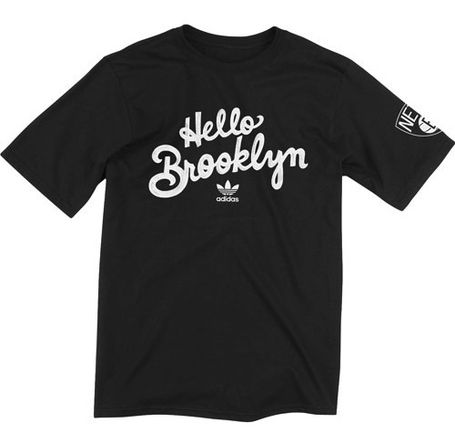 Yes Man #1: "I get it. Jay-Z had a hit jam called "Hello Brooklyn" on the "American Gangster" soundtrack. Plus, it's in a scripted font a la Hello Kitty. I could see my milquetoast children wearing this to school and not getting beat up."

Yes Man #2: "I'm not so certain. Isn't marketing a hit Jay song for a basketball team diluting the brand that is the NBA's Brooklyn Nets?"

Yes Man #2: "Sorry, Mr. Prokhorov. Also, isn't it irresponsible of us to use a popular hip-hop, well not "anthem," but rap song from one of Brooklyn's most famous citizens when there are many, many, many, poor, urban youth in Brooklyn? I mean, this isn't human trafficking but couldn't we at least donate a portion of sales to the NYC public schools?"

[sound of human flesh being urgently ripped from muscle fibers]

**Well-dressed, creative director has torn skin from face to reveal a reptilian face, devours Yes Man #2 in a single bite, much like a snake eats a mouse. Puts human mask back on face. Delicately burps.**

Well-dressed, creative director: "If you'll now direct your attention to our next merch offering...I think you'll all agree that this one will have us wanting to "overcharge for what they did to the Cold Crush."" 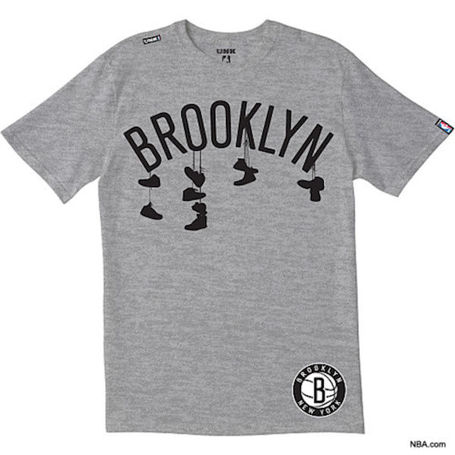 Yes Man #1: "Mmm, I dunno. Aren't shoes hanging from power lines more or less an antiquated notion in this part of Brooklyn that more strongly correlate to the quasi-mythos of Jay-Z's own past rather than the identity of the New Jersey/Brooklyn Nets or even to Brooklyn's own vast history?

Additionally, isn't it misguided at best and profiling at worst to market an internationally famous NBA franchise with trite nods to a hip-hop culture that, while always entrenched in Brooklyn and always will have its historic roots in this borough, has largely moved to other parts of the city, country and globe? Furthermore, with Brooklyn and Prospect Heights in particular gentrifying so rapidly and with the Brooklyn Nets moving in to a brand new arena wouldn't it have made sense to brand the team with a new look and vibe that points to a brighter future, rather than lean on such old hat tropes that point to a nostalgia built on the backs of drug dealers and rampant crime?

Beyond that, why did you eat Yes Man #2? We were a team, just like the Nets used to be instead of being some sort of ox yoked to a cart full of cliched merchandise and marketing gimmicks."

[sound of human flesh being urgently ripped from muscle fibers]

**Well-dressed, creative director has torn skin from face to reveal a reptilian face, devours Yes Man #1 in a single bite, much like a snake eats a mouse. Puts human mask back on face. Delicately burps.**

Jay-Z: "Y'all crazy for this one, well-dressed, creative director!"