The Valparaiso Crusaders (22-10, 14-4) gave their hometown crowd a reason to go crazy Saturday evening as they beat the No. 5-seeded Butler Bulldogs (20-14, 11-7), punching their ticket for the 2012 Horizon League Championship Game.

Junior G-F Ryan Broekhoff dominated the paint and the basket in a 33-minute showing. Broekhoff scored 19 points and collected 16 rebounds -- one of three Crusaders to score double digits on night. The Valparaiso defense managed to almost double Butler's rebounds, taking 37 boards to the Bulldogs' 20. That didn't stop G Crishawn Hopkins, however, from scoring 18 points with a rebound and a steal.

Detroit G D'Aundray Brown put up a solid effort for the Bulldogs, scoring 17 points with 7 rebounds, but his work proved insufficient to overcome the hot-shooting Titans, who landed 40% of their field goals on the night.

Here's a look at the 2012 Horizon League Bracket courtesy of HorizonLeague.com: 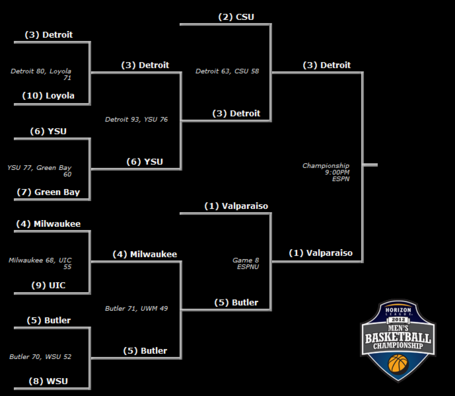