The state of Illinois might not have a team in the NCAA Tournament, but there are a host of local kids doing big things as March Madness enters the Sweet 16.

Share All sharing options for: NCAA Tournament 2012: A Look At Chicagoland Players Shining During March Madness

As the Minnesota Golden Gophers began to pull away from Northwestern in overtime of the opening round of the Big Ten Tournament, it became apparent that the Wildcats' historic NCAA Tournament drought would continue for another season. It also cemented the fact that March Madness would begin without a single in-state institution for Chicago to root for.

Over the past week, much has been made of Chicago's Big Dance no-show, particularly when juxtaposed against the state of Ohio sending four teams to the Sweet 16. But just because the Illinois Fighting Illini are stuck in a perpetual state of chagrin, and just because Northwestern's futility is enough to garner sympathy from even the most battle-tested Cubs fans doesn't mean March Madness is lacking a distinct Chicago flavor. It's quite the opposite, actually.

Don't let the bracket fool you: Chicago is still very much a hoops mecca. If the local institutions have made a misstep (and they have), it's the inability to recruit in their own backyard. Illinois couldn't get Glenbrook North superstar Jon Scheyer to commit even though his high school coach was Bruce Weber's brother. Thornwood's Eddy Curry chose an NBA payday over revitalizing DePaul basketball. Even Derrick Rose -- who gets announced as "From Chicago..." during the Bulls' starting lineup introductions, spurned the local schools to take his one-and-done routine to John Calipari and Memphis.

When the NCAA Tournament began, there were 35 local players participating, and that's just in the Chicagoland area, a sect that doesn't include Purdue's Lewis Jackson (Decatur) or Indiana's Verdell Jones (Champaign), to name a few. Now that the field has been whittled down to the Sweet 16, we thought it'd be a good idea to put together a primer of local kids still around, repping Chicago during March Madness.

By now you've surely heard of Davis, the best player in college basketball and the sure-fire No. 1 overall pick in the 2012 NBA Draft. When combined with Rose (No. 1 in 2008) and current Simeon Academy forward Jabari Parker (top-ranked incoming senior in the country), Chicago's basketball dominance could be spelled out across three No. 1 overall NBA selections in seven years.

Davis, for as great as he is, isn't Rose. Rose won back-to-back state titles at Simeon his final two years of high school; Davis played for a CPS Blue League team, the local high school basketball equivalent of the minor leagues. Rose was synonymous with Chicago hoops even before the Bulls lucked out in the draft lottery to get him. Davis doesn't have civic pride inked on his arms like Rose or the Bulls star's distinct South Side drawl in the voice, let alone the state championship rings.

Here's what Davis has going for him, though: he just might be the most unique otherworldly talent the college game has seen since, what, Kevin Durant? Rose is a deity, but his game is large part similar to the other hyperspeed lead guards of the day like Russell Westbrook and John Wall. Davis is peerless. How many other living humans could have made this play?

Look again: Davis is at the three-point line when the ball is shot. His court-awareness, his athletic fluidity, and his instinctual nose for the ball is without equal. Davis went from a 6-foot-2 guard to a 6-foot-10 power forward between his sophomore and junior years of high school. That's enough to even turn the most nimble athlete into an awkward mess of knees and elbows. Somehow, Davis seems just as graceful as he ever was.

Also, there's this: Davis' 166 blocks right now would ranked him 15th in the country if he were his own team. That is just silly. He's got more than a little bit of Bill Russell in him. Unlike other contemporary shot blocking czars like Dwight Howard and JaVale McGee, Davis doesn't swat the ball into the sixth row -- he controls his blocks to ensure his team keeps possession.

• Did you know that Kentucky retains possession on 58.1 percent of Davis’ blocks?*

Also, he has the most strident unibrow I have ever seen. 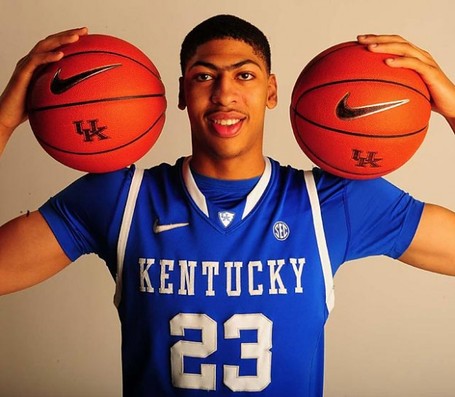 Yes, Davis is a mercenary in John Calipari's one-and-done Ponzi scheme; yes, it's generally no fun rooting for the best player on the tournament's best team. But when it comes to the long and proud lineage of Chicago hoops, Davis is the next torchbearer. A player like this doesn't come from your city every year, even if the area's recent starpower streak might have you thinking that way.

Ohio's lead guard embodies everything that makes the March Madness great. He's generously listed at 5-foot-11, has no qualms about pulling up for a 30-foot three-pointer, and personifies the 'Chicago Tough' aesthetic White Sox general manager Kenny Williams fantasizes about at night.

In high school, Cooper starred on a loaded Hales Franciscan team full of high major talent before transferring to Seton for his senior season. I enjoyed this anecdote from Cooper's high school days, via a recent column by ESPN Chicago's Jon Greenberg:

Seton's second and final loss came against Catholic League rival Leo in the Big Dipper tournament. After the game, his rival point guard, James Pointer, told reporters he kept a list of higher-touted point guards and crossed them off when he beat them.

Cooper read the story and cut it out of the Chicago Sun-Times. He put the story in his sock when Seton played Leo again, and when they won by 20 points, he pulled it out and showed reporters.

No. 13 Ohio is the lowest seeded team to reach the Sweet 16 since 2006, and Cooper has been their best player. He scored 21 points in the Bobcats' upset of No. 4 Michigan, and helped drag his team to the Sweet 16 by posting 19 points, seven assists, and six rebounds against South Florida in the Round of 32.

Cooper and Ohio will face their biggest test by a mile on Friday with a matchup against top-seeded North Carolina. This is David vs. Goliath in a very real sense.

The first time I saw Dion Dixon play basketball was in a then-brand new gym at Chicago State University during his senior season at Crane. I was there to cover a game for Chicago Sun-Times, Bruce Weber was there too after a loss to Arizona at the United Center, presumably to see De La Salle freshman forward Mike Shaw (who he'd get) and Curie freshman Wayne Blackshear (who would go to Louisville). Dixon and Crane were playing in the game before the one I was supposed to cover. Thank goodness I got there a little early.

Crane had possession down two with about 1:30 left. There's no shot clock in high school hoops, so when Dixon got the ball, there was no way he was passing it. Dixon dodged defenders at the top of the key for nearly :90 seconds before launching a one-footed three-pointer from the wing that the would swish through to give Crane the win. So far as buzzer-beaters go, this was one was remarkable.

Dixon has gone on to have a great career at Cincinnati. He was the Bearcats' second leading scorer this year (over 13 points per game), and has come up big thus far in the NCAA Tournament. Dixon had 12 points against Texas in the opening round, and then dropped 15 points on Florida State as Cincinnati upset the Seminoles.

Next up? A meeting with No. 1 Ohio State and former Zion-Benton star Lenzelle Smith.

The Buckeyes also have Whitney Young product Sam Thompson, a freshman Rudy Gay-clone who helped the Dolphins to a state championship in 2009, but he's mostly spent his freshman season riding the bench. Former Zion-Benton grad Lenzelle Smith, however, has turned into a nice role player for coach Thad Matta in his sophomore season.

Smith has a reputation as being a jack-of-all-trades type for the Buckeyes: he handles the rock a bit, is a good passer, scores some, and has tremendous length that helps him defend bigger players. The 6-foot-4 guard averaged just over 24 minutes per game this season, posting 6.4 points, 4.5 rebounds and 2.1 assists per night.

Smith added seven points and five rebounds for the Buckeyes as they defeated Gonzaga to advance to the Sweet 16.

Wisconsin has three local players (Deerfield's Duje Dukan and Benet's Frank Kaminsky), but Brust has made the biggest impact for Bo Ryan. Brust was a dynamic scorer in high school, routinely dropping 40 or 50 points. For a 6-foot guard that didn't even have a size advantage playing against other kids from the north suburbs, that's impressive. Brust originally commited to Iowa before a coaching change pushed him to Madison. The Badgers are sure glad to have him.

Brust showcased his scoring acumen early in the season: he hung 21 against BYU and 25 against UNLV in nonconference wins before slowing down a bit as Big Ten play began. Still, Brust averaged seven points per game in the regular season, and scored 11 against fifth-seeded Vanderbilt to help Wisconsin reach the Sweet 16.

Other Chicago players in the Sweet 16 include Xavier's Andre Wakler and Louisville's Wayne Blackshear. Blackshear was slowed by a shoulder injury this season, but he should be primed for a monster sophomore campaign.

Don't forget about UConn guard Ryan Boatright, either. After a freshman season plagued by bogus NCAA sanctions, the diminutive Huskies guard will no doubt be headed for big things next season.