The opening round of the Missouri Valley Conference tournament -- Arch Madness -- was not kind to the No. 9 seed Southern Illinois Salukis No. 10 seed Bradley Braves. Both teams were bounced from the bracket on Thursday, as Southern Illinois lost 65-51 to the Indiana State Sycamores and Bradley fell the Drake Bulldogs by a score of 65-49. now local hopes to take the tournament are pinned solely on the No. 4 seed Illinois State Redbirds, who take on the No. 5 seed Northern Iowa Panthers on Friday afternoon.

SB Nation's Bill Connelly broke down the biggest storylines of the MVC tournament on Thursday, and Redbirds forward Jackie Carmichael and Panthers guard Anthony James both appeared on his "Players To Watch" list:

Jackie Carmichael, Illinois State. The 6-foot-9 junior from Manhattan, Kan. is a dominant force for the Redbirds' offense. His game is quite similar to that of Stutz above; he shoots 53 percent on two-pointers and ranks fourth in the country in defensive rebound rate. Accordingly, he almost averaged a double-double.

Anthony James, Northern Iowa. The six-foot junior dominates the UNI offense, for better or worse. He takes one-third of the shots when he is on the floor, and he was the only Panther to average double-digits. He makes 40 percent of his 3-pointers, and when he's on, UNI is very dangerous. Needless to say, he'll need to be on.

Here is a look at the updated bracket going into Friday's action: 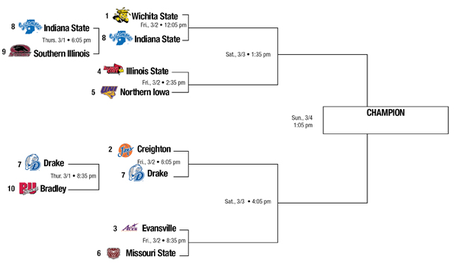 The full tournament bracket can also be found here, and below is the information on Illinois State's Friday game:

For more on NCAA Hoops, check out the SB Nation NCAA hub at sbnation.com/NCAA-Basketball.