The 'Anthony Davis Swat Map' Is Kind Of Amazing

Share All sharing options for: The 'Anthony Davis Swat Map' Is Kind Of Amazing

The Kentucky Wildcats enter the NCAA Tournament as the odds-on favorites to win it all, and there's more of a local connection than you might realize: Anthony Davis -- coach John Calipari's best player and future No. 1 overall pick this June in the NBA Draft -- grew up in Chicago. Davis is the area's best baller since Bulls point guard Derrick Rose, but his name isn't nearly as ingrained in the city, even at similar points in their careers. Rose played big-time high school hoops and won two state championships at Simeon, while Davis spent his prep years at Perspectives-MSA, an academics-first charter school he attended since sixth grade.

With Illinois and Northwestern underwhelming yet again and failing to make the NCAA Tournament, Davis and Kentucky will be our top rooting interest in March Madness. He's a phenomenal player and truly unique star. Local high school hoops scout Scott Phillips told me recently that Davis is "as versatile defensively as Kevin Durant is offensively".

After the jump, we have a map of Davis' blocks this season that really hammers home the point. 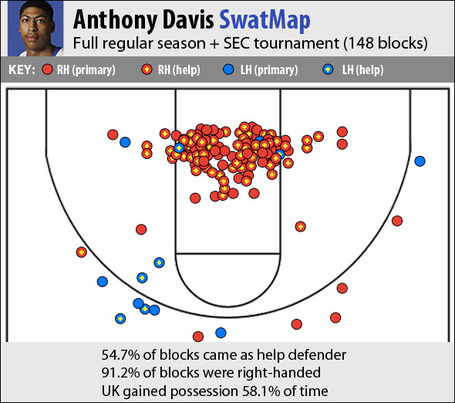 This comes from the great Luke Winn, whose Sports Illustrated Tournament blog is a must-read for me every March.

Just look at all those swats: Davis' 157 blocks this year would rank him 28th in the country if he were his own team. The dude is amazing, and is next in the proud lineage of superstar basketball players from Chicago. We should be pleased to call him our own.