The honors continue to roll in for Luol Deng. The Chicago Bulls' do-everything small forward was recently selected to play in his first All-Star Game this Sunday, and on the way to Orlando for the festivities, Deng sent out a tweet that would land him on @Humblebrag.

Humblebrag, for the uninitiated, is a popular Twitter account that retweets celebrities who, well, try to brag humbly. Looking for a good example? Here's one from "Community" star Donald Glover, who recently appeared on Humblebrag for tweeting: "I'm trending. Did I die?"

Think of Humblebrag as an Internet watchdog. But here's our question: who watches the watchdog? 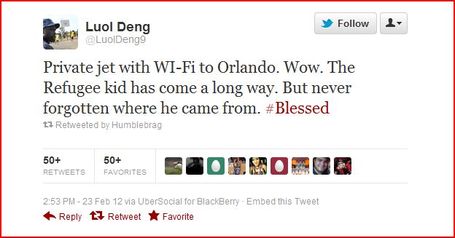 But is it really deserved? Does this actually constitute a humblebrag? I lean towards no.

Deng is known as a, well, humble guy, and the "Private jet to Orlando" thing doesn't really amount to a brag, so far as NBA players are concerned. For Deng, it seems like more of a moment of reflection on what has truly been a wild life journey.

As ESPN Chicago columnist Jon Greenberg noted, "No matter your wealth, we all love airplane wifi". This much is true.

As with all matters of being humble, I refer to the eternally great Virginia-based rap duo Clipse, who once eloquently stated: "I tried being humble / humble get no respect."

Some of us might even like that lyric enough to name of music-based Tumblr blog after it. Words to live by from Malice.