The Bear Trap, Week 17: The Bears miss playoffs despite squeaking out a win in Detroit

Share All sharing options for: The Bear Trap, Week 17: The Bears miss playoffs despite squeaking out a win in Detroit

Welcome to The Bear Trap, a weekly look at the Bears game that was. In this space we will deal with the most pressing issues surrounding the Bears and their previous game. We'll favor overreaction, both positive and negative, to fair, balanced analysis. We'll ask if the Bears should withhold planning the Super Bowl Shuffle 2012 music video and if Brandon Marshall's erratic off-field behavior has derailed the season yet. We'll wonder if Jay Cutler is best described as aloof or super-duper aloof and tally the number of fucks the notorious Shoulder Shrug has given up to this point. All that, plus some old fashioned Packer hate. We'll keep it lighthearted as long as it's understood the hate is real and comes from a dark place.

So submit to the underachieving jaws of The Bear Trap. We'll hunt, but don't expect us to gather.

Tim Jennings Honorary Game Ball - The final Tim Jennings Honorary Game Ball of the season goes to Matt Forte, who rushed for 103 yards on 24 carries and a touchdown. In hindsight, Cutler's 3rd down scramble to extend the last drive, Earl Bennett's touchdown catch, or Julius Peppers' fumble recovery were all bigger plays in this game, but we can't stop thinking about Forte's final run to officially clinch the game. As he dragged a defender past the first down marker, we allowed ourselves to enjoy watching football for the first time in eight weeks. That enjoyment quickly began to subside with every passing second of the Packers-Vikings game, only strengthening our appreciation of the run. We associate a brief moment of happiness with Matt Forte, and for that, we thank and honor him.

What To Watch For (Formerly The Optimist's Take) - You could always watch the playoffs, but you know how that will turn out. The Packers will win by 20, teams will play with shocking, unimaginable levels of competence the Bears have never approached, and you'll trick yourself into thinking we could have beaten the 49ers if just given a chance. After a while, the playoffs start to feel like a stroll down Fifth Avenue, watching customers shop in the stores you're not even allowed to enter. Watch the playoffs at your own risk.

A better reason to watch: the Bears' coaching search. It's exciting to find out which guy you'll want fired in a few years. Oh, we don't care about adapting to a league geared towards the offensive side of the ball. We want to know if you plan on beating the Packers anytime soon. Are the Packers your number one priority?

The Pessimist's Take - This game was a microcosm of the Bears' season. The first half went swimmingly well, with the Bears at one point leading by 17 because the defense "forced" three turnovers. The Lions scored a late first half touchdown to make the game much closer than it seemed. The second half didn't go as well because the Bears could only force one turnover. Overall, the Bears had to settle for a field goal after three of the Lions' four turnovers, totaling 16 of their 26 points off turnovers. The offense continued with their putrid third-down and red zone efficiency. The only marked differences from this awful season was Brandon Marshall's production, picked up by Earl Bennett, and the lack of offensive turnovers. One for the road, as they say. This one happened to be a shot of grain alcohol.

Obviously they are not. The Bears are going to vacation in a tropical paradise to celebrate the end of a tough season. You are not a professional athlete only because you're a tad undersized and/or blew out your knee in high school. No one believes you, but keep saying it because it's true.

This Week's Adjective To Describe Jay Cutler - Transitional. Next year, Jay Cutler will be cussing out his 4th offensive coordinator in five years. The offense was in such disarray this year that arguments ended in "You're not my real father, Mike." Sure, Cutler may accept the next guy's invitation to a ball game, but he's still calling him by his first name at the end of the day.

Number Of Fucks Given - 3 for an even 16 to end the year. We couldn't have drawn it up any more perfectly. Cutty given exactly one fuck per game, and thus concludes our science experiment. The Lions made a concerted effort to get a rise out of Cutty and they succeeded to an extent. While Cutty gave a fuck, he didn't give enough of a fuck to throw a crucial interception or engage in a bro-down. The Lions will need to reconsider their intimidation tactics for next year. 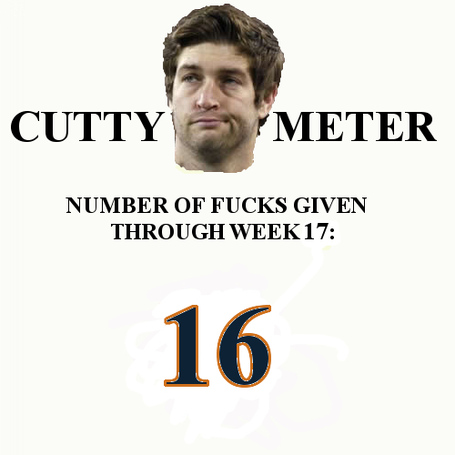 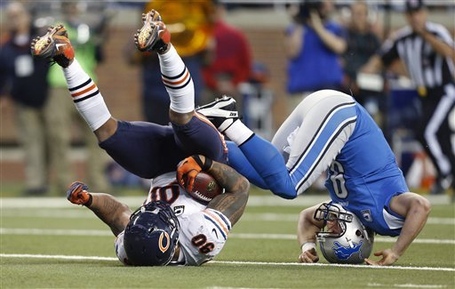 As a kid, you can do somersaults for 13 straight hours without a care in the world. As an adult, the mere thought of attempting a somersault is grounds for a reality check. It was only a couple of months ago when the Bears looked to be somersaulting their way to the playoffs and possibly the Super Bowl. Now they're on the ground, mid-somersault, keeping company with the likes of the Lions. Peppers has the ball, for what it's worth.

Requisite Packer Hate - We hate you and are never talking to you again.

*closes bedroom door/book on the season*

AND DON'T BOTHER KNOCKING! WE'RE NOT COMING OUT EVER!