The Bear Trap sure hopes you have something better to do on Christmas Eve than read about the Bears and Cardinals.

So submit to the uncovered jaws of The Bear Trap. Arizona quarterbacks keep walking right into us.

Tim Jennings Honorary Game Ball - Some good candidates this week: Zack Bowman for setting the tone, Charles Tillman for adding another Pick-6 to his resume, and Matt Forte for finally establishing some semblance of a running game. But we're handing over the Tim Jennings Honorary Game Ball to a dark horse candidate, the Arizona Cardinals fans in attendance. There were very few of you, and those of you who did show up draped paper bags over your heads. Impressively, your boos were not the least bit muffled.

When Brian Urlacher and Lance Briggs told us last week that Bears fans were the only fans who booed their team at home, we thought we had gone crazy. Surely, we remembered many other home sides leaving the field to a chorus of boos in the past. But we were willing to give Urlacher and Briggs the benefit of the doubt. It's them, not us, after all, who watch 10 hours of football on Sunday. They're the ones who watch every highlight package, pore over fantasy stats, and scour various message boards to unearth anything that could possibly pass for football-relevant information. It's not like they only have time to prepare for their next opponent. They're completely aware of everything going on with the 30 other teams as well.

Well, evidently they got this one wrong. Other fan bases DO in fact boo their respective teams at home. Thank you for confirming our sanity, Sad Paper Bag Faces of the Arizona Cardinals.

What To Watch For (Formerly 'The Optimist's Take) - If for some reason you still believe in the 2012 Bears, stop that immediately. Having already accepted a season that will end in tears, we suggest something else to watch for besides a win:

Calvin Johnson's pursuit of 2,000 receiving yards. Johnson already passed Jerry Rice's single-season record of 1,848. He needs 108 to reach 2,000 -- a total he's surpassed in 11 of his 15 games. You'll remember Tillman and the Bears had more success against Johnson than anyone this year, holding him to only 3 catches for 34 yards when they met in October.

For those who just can't stop believin', the Bears' road to the playoffs is simple. If they beat the Lions AND the Packers beat the Vikings, they're in. That's it. Know what else was supposed to be simple? Winning 3 of their last 8 games.

The Pessimist's Take - Special teams used to be, arguably, the Bears' biggest strength. Now they're getting 20-yard field goals blocked and are unable to field a punt properly. It's crazy. A football, while prone to unpredictable bounces because of its awkward shape, is still capable of clearly hitting you from five yards away. Stay away from the fucking ball if you have no intention of fielding it.

Matt Forte left the game with an ankle injury and we're very concerned. Forte says he'll play next week, but we know better than to believe anyone besides Luol Deng when he says he's going to play hurt. The alternatives are Armando Allen and Khalil Bell, who have been cut more times than your holiday wrapping paper.

It's like we said last week, if the Bears can allow 13 points or less, force 3 or more turnovers, and score at least one defensive touchdown, they have a chance to win. This is not a sustainable formula. OK, against Matthew Stafford, maybe it is! Pessimism!

This Week's Adjective To Describe Jay Cutler - Persistent. Cutler completed only one of his first 11 passes. We've given up after ONE unsuccessful attempt at opening a jar of jelly, so we can respect a man who isn't so easily deterred. In our defense, Brandon Marshall wasn't around to help us.

Number Of Fucks Given - One for a season total of 13. Alshon Jeffery ran the wrong route or something. Now take it easy there, Cutty. Rookies are still in their developmental stages and likely to imitate everything you do and say in front of them. Start zig-zagging your arms in strange patterns around Jeffery and he's bound to do the same to corners, earning himself another offensive pass interference penalty. And please, please, can you keep your cursing to a minimum? Alshon told his grandfather "To go fuck himself" yesterday. I wonder where he learned that from? 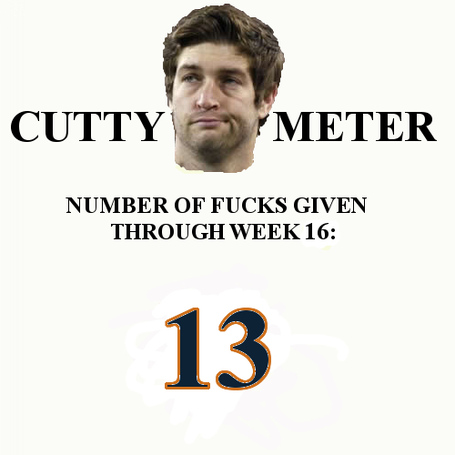 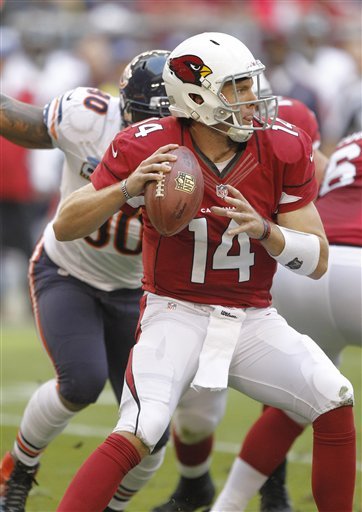 Eyes squinted, tongue hanging out, shoulders hunched; Ryan Lindley was trying so hard out there. Even Dick Stockton, in one of his brief moments of clarity, basically said Lindley is doing the best he can, he just isn't very good. We kind of feel bad for Lindley. He was benched in favor of Brian Hoyer after going 17-30 for 141 yards and one interception. That was one of his better performances of the season and he was benched as a result.

Requisite Packer Hate Encouragement - We know how y'all feel about the Vikings. What kind of grown man paints himself head to toe in purple and then throws on a blonde wig? That sort of hooey would never fly in a great city like Green Bay. Now's your chance to put them in their place. Don't give them the satisfaction of competing in the playoffs. Your playoffs. Hell, do it for yourselves. Grab that 2-seed and first round bye. God knows y'all deserve it. All that hard work y'all's been putting in. No reason to ruin it now against a team known for hanging its hat on regular season accomplishments. Adrian Peterson is a fine player but he's no Aaron Rodgers. Peterson wins ya MVP trophies, A-Rod wins ya MVP trophies and Lombardi trophies. That trophy ain't named after Bud Grant, I can tell ya that much. So go get what's yours. And if the Bears happen to sneak into the playoffs because of it, well then goddammit, we'd be mighty obliged.