The Bear Trap, Week 12: Injuries a concern after 28-10 win over Vikings

The Bear Trap will take the win and preferably the Minnesota Vikings five more times to close out the season.

Share All sharing options for: The Bear Trap, Week 12: Injuries a concern after 28-10 win over Vikings

So submit to the strategically placed claws of The Bear Trap. Percy Harvin's left ankle is our greatest catch yet.

Tim Jennings Honorary Game Ball - This week's Tim Jennings Honorary Game Ball goes to punter/holder Adam Podlesh. Some might suggest that handing the Game Ball to the punter for an inconsequential two-point conversion cheapens the award, to which we would respond: We put this award through a wood chipper last week. Clearly we're not above such nonsense. Podlesh put the Bears ahead 18-3 in the second quarter after running in for the two-point conversion on a designed play meant to punish the defense for overloading one side of the line. After the play, he might as well have written "Relieved" across his forehead.

Podlesh is the model for survival in the notoriously cutthroat NFL. Just a few weeks ago, the Bears brought in punters to challenge for his job and ridicule him in the showers. He could have lost focus and his job to boot. He could have left the team altogether. He could have written a diatribe for Deadspin. Instead, he worked harder and found himself in the end zone to show for it. Think if Chilo Rachal had not left the team last week after losing his starting job. He would have seen some playing time yesterday. Next man up, as they say. Even if you were the first man down.

The Optimist's Take - The Bears got back to forcing the takeaways they need to be successful. Three more this week. Two Adrian Peterson fumbles and a Christian Ponder pass so badly overthrown, we needed to be reminded that Bernard Berrian no longer plays for the Vikings, and did not, in fact, run the wrong route again.

But more than anything, the biggest reason for optimism was the way the Bears fought through injuries. They lost Devin Hester early to a concussion and then Charles Tillman to an ankle injury. In the second half, Matt Forte and both starting guards, Lance Louis and Chris Spencer, were sidelined. Even with these injuries at significant positions, there was very little drop off in play (sad in the case of Hester, encouraging for everywhere else). The Bears have shown enough to prove they can overcome an injury to any player besides Cutler, and maybe Brandon Marshall. If they can keep the QB healthy, they have a chance against anyone.

The Pessimist's Take - The Vikings offense without Percy Harvin is like eating tomato soup with a fork, or the Jaguars offense, if you prefer a more practical comparison. Micheal Jenkins hasn't been a threat since his Ohio State days. Devin Aromashodu is so bad he could barely crack the pre-Brandon Marshall lineup. Jerome Simpson drops anything that isn't physically attached to him. Make no mistake, Adrian Peterson drives this offense, but it's Percy Harvin that occasionally puts them over the top. Without Harvin, the Bears defense could focus everything on Peterson, and did so with great success in the first half. Tillman's second-half injury wasn't as costly as it normally would have been because there was no difference maker on the other side of the ball that could have potentially taken advantage of his absence. They Bears caught the Vikings at the right time is all.

NO. The Bears are going to continue to beat the teams they should beat. We'll need to see a Week 15 victory over the Packers before we even consider hopping back on the Super Bowl Express bus. Dubya already summed up our feelings on this team more succinctly than we ever could.

This Week's Adjective To Describe Jay Cutler - Helpful. One minute you're cursing out your buddy on the playground, calling his mother the vilest, most despicable things your brain can put words to. The next minute you've made up and are helping him tie his shoes. Boys will be boys.

J'Marcus Webb is a large man and if his pass blocking is any indication, he would have fallen flat on his face had he attempted to tie his own shoe. Credit Cutler for helping him out and resisting the urge to tie his laces together to see if it made a difference.

Number Of Fucks Given - Two fucks given this week to bring the season total to 8. The first fuck came towards the end of the first quarter after the sideline failed to relay the play call fast enough. The second fuck came after Kellen Davis dropped a sure first down over the middle. "Are you fucking kidding me?" Cutty verbalized. Are you fucking kidding me? is the Pavlovian response to every pass thrown Davis' way. 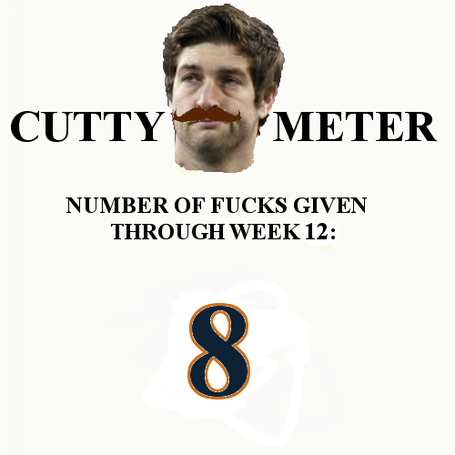 We'd be remiss if we failed to point out the ultimate anti-fuck moment of the season thus far. We don't count the fucks Cutty doesn't give because we'd be up all night, but this deserved special distinction. On 1st and 10 from the Vikings' 18, Cutty scrambled for five yards, stiff-arming cornerback A.J. Jefferson in the process. On his way back to the huddle, he flipped the ball into Jefferson's chest, earning a 15-yard taunting penalty. Worth it only because it didn't cost the Bears the game. You'll remember Brandon Marshall did something very similar when the Bears and Dolphins met in 2010. 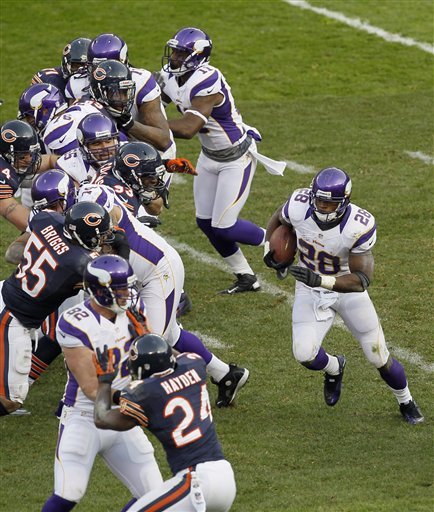 Every time Adrian Peterson cuts back an angel gets its wings (and another moron thinks Derrick Rose can return by December). Different injuries, different bodies, different sports, people!

Requisite Packer Hate - November is winding down. Come Sunday, all of these glorious mustaches we've half-heartedly made fun of will probably be gone. So let's take a second to compare, shall we? Aaron Rodgers is no stranger to the mustache, dating back to his days as a curious and probably depressed backup to a quarterback he was clearly better than. Rodgers grows his mustache thick and lets it curve around the edges of his mouth. He resembles either an Old West huckster or a rogue outlaw with a chip on his shoulder because Billy the Kid didn't look him in the eye that one time.

Jay Cutler keeps his mustache pencil-thin and trimmed low. His golden brown facial hair makes him appear rather effeminate and/or French. He could pass easily for a member of the post-war "new money," or a regular Clark Gable. All of these conflicting ideas are meant to illustrate our belief that Cutler looks to be the classier of the two. If you think style has no place in a football discussion, fine. Just stare at the win column.