The Bear Trap is taking Aldon Smith with us to help clear out the Black Friday crowds.

So submit to the deeply flawed claws of The Bear Trap. Because we all need a bogus penalty to extend our only scoring drive of the game sometimes.

Tim Jennings Honorary Game Ball - This week's Tim Jennings Honorary Game Ball goes to . . . no one. The award no longer exists. You see, we've dumped thousands of dollars into the upkeep of the trophy -- diamond encrustation, elaborate engravings, around-the-clock security, etc. All of that, however, was for naught, as, in a fit of rage, we jammed the trophy into the wood chipper Fargo-style. Out came little pieces of human shit and regret. If you've never seen little pieces of regret, trust us, you do not want to. This award has been a sham all these weeks. Like Fargo, there are no winners, only different degrees of losing.

The Optimist's Take - 49ers game? What game? No time to even acknowledge it, we're so focused on the future. Stop living in the past. Take a trip to Green Bay if you want to roll around in a puddle of tradition and lukewarm beer. We're just taking a peek at the upcoming schedule and WHAT DO WE HAVE HERE?!?! Five winnable games and the Packers game. Make that SIX winnable games. We forgot this was the optimist's section for a second.

There's really only a few minor issues that need fixing: the entire offensive line, our franchise quarterback's oft-concussed brain, the punting game, the return game, a defense that has no interest in carrying the team for another half a season. Where's the faith? Three more wins! Say it with us! Three more wins!

The Pessimist's Take - Colin Kaepernick, in his first NFL start, was made to look better than Alex Smith ever will. Quarterback controversy? Let's wait and see what Kaepernick does against an elite defense. We've said it every single week and will continue to say it: the Bears are not very good when the defense isn't forcing four turnovers and scoring two touchdowns per game. The defense has come back to Earth, and not coincidentally, so has the team.

The offensive line was as effective as five pieces of plywood with a couple of googly eyes glued on. Aldon Smith reportedly was counting to "5 Mississippi" too fast. If the J'Marcus Webb experience is spilling coffee on yourself while driving, then the Gabe Carimi experience is the ensuing car wreck. Jim Harbaugh was entrusted with the cleanup and just decided to sweep everything to the side of the road and light it on fire before challenging for a meaningless two points.

NO. The Bears are going to lapse into a food coma this Thanksgiving and show no discernible difference from the way they looked Monday.

This Week's Adjective To Describe Jay Cutler - Absent. Cutler didn't make the trip to San Francisco this week as he continued to recover from his concussion. There's some players we wouldn't mind leaving in San Francisco regardless of whether suffered an injury or not. Just about all of them.

Number Of Fucks Given - 0 fucks given this week with an asterik next to the season total of 6 because we have no idea if Cutty gave any fucks from the comfort of his own home. Wouldn't it be fascinating to know how Cutty watched the game? Did he wear his authentic XL #15 jersey? Did he keep it down so as not to wake the baby? Did he turn the game off in the 2nd quarter and catch up on Homeland? These questions need answers. 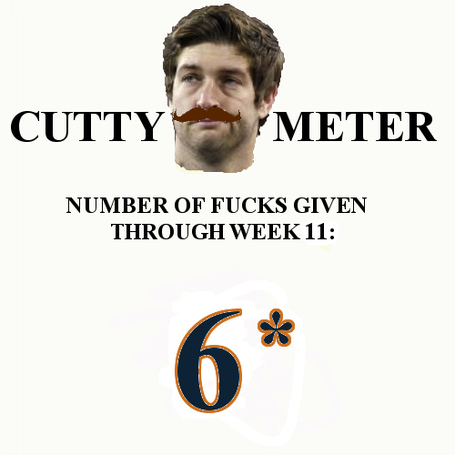 Number Of Brandon Marshall Off-Field Incidents - 0, but he came dangerously close to an on-field incident. 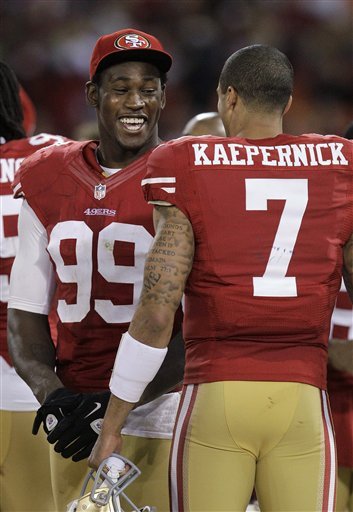 Colin Kaepernick and Aldon Smith, a pair of second year players who have just decimated the Bears on both sides of the ball, share a quick conversation on the sidelines.

Smith - They were talkin' like this was gonna be a tough test for you. [laughs]

Kaepernick - I know! Alex Smith makes it look a lot more difficult than it is.

Smith - He does! He totally does!

Kaepernick - How many sacks did you have? Five? I think you're leading the league now.

Smith - I am! It's been pretty easy for me too. I've just been running forward and waiting for them to trip over themselves.

Smith - I'm all about the sweet potatoes.

Kaepernick - I'm more of a stuffing man, myself.

Packers fans must feel pretty good right about now after squeaking out a win against the lowly Lions and moving into first place in the division after the Bears' loss. Congratulations. Seriously, congratulations. But before you pull out the map to look up which state New Orleans is located in, let us remind you of what awaits next week. The New York Giants . . . at the Meadowlands . . . coming off an embarrassing loss to the Bengals . . . with an extra week to prepare. Good luck, as they say. You're going to need it. While you're waiting, enjoy the above video of the last time the two teams faced off. And if you're searching for reasons to be thankful this holiday season, you can start by thanking us for not embedding this.