On a nippy October morning Tsegaye Kebede, a 5'3 Ethiopian, demolished the elite men's field through the second half of the Chicago Marathon course to earn his first Chicago Marathon title and to become the first Ethiopian to win the world's second-largest 26.2 miler. Kebede, oh! by the way, also happened to smash into smithereens the Chicago Marathon course record by nearly a minute with a time of 2:04:38, beating the old record, set only last year, by 59 seconds. Kebede made the second half of the race his own after hammering out five consecutive sub-4:40 miles to distance himself, punishing the pavement and competition through the final 1/3 of the race. As he came down the stretch Kebede, like a moon breaking its orbit from a planet, pulled away from his much larger countryman (and second place winner) Feyisa Lilesa. Lilesa, the only runner to keep up with Kebede's ferocious pace, also blasted away the old course record in a scorching two hours, four minutes, and fifty-two seconds. Yes, you read that correctly, the second-place finisher still trampled the year-old course record.

Olympian Dathan Ritzenhein was the first American male to complete the course. Ritzenhein finished in a personal best time of 2:09:55 which was good enough for ninth place overall in the elite field. Following a disastrous 2011 season that saw him injured and largely out of competition, Ritzenhein's PR, in his first Chicago Marathon nonetheless, is gravy for a 2012 campaign that already saw him finish among the world's best in the London Olympics. 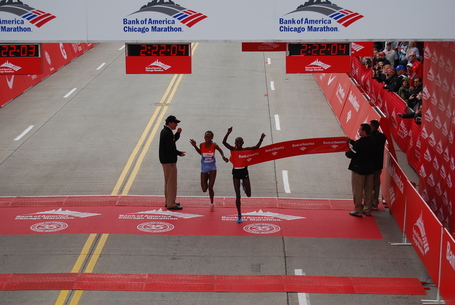 A properly constructed photo-finish. Who won? Read on, dear reader, read on.

On the women's side it was more Ethiopia as Atsede Baysa won in 2:22:03 as she outlasted Kenya's Rita Jeptoo by a mere second in the closest finish the Chicago Marathon has ever seen. The Russian, Liliyan Shobukhova, who had won the past three Marathons, finished a distant fourth place with a time of 2:22:59.

More to come from Grant Park later this afternoon...