The Bear Trap's confidence never wavered. Mostly because our TV was flickering in and out.

Welcome to The Bear Trap, a weekly look at the Bears game that was. In this space, we will deal with the most pressing issues surrounding the Bears and their previous game. We'll favor overreaction, both positive and negative, to fair, balanced analysis. We'll ask if the Bears should withhold the Super Bowl Shuffle 2012 music video and if Brandon Marshall's erratic off-field behavior has derailed the season yet. We'll wonder if Jay Cutler is best described as aloof or super-duper aloof, and tally the number of fucks the notorious Shoulder Shrug has given up to this point. All that, plus some old fashioned Packer hate. We'll keep it lighthearted as long as it's understood the hate is real and comes from a dark place.

So submit to The Bear Trap's corroded metal jaws. The Bear Trap doesn't mind a close game once in a while. Blood will be spilled regardless.

Tim Jennings Honorary Game Ball - After three weeks we had seen enough. We officially made Tim Jennings the namesake of the Internet's most prestigious award because at the time, it looked like he was going to win it every week. Then fellow corner Charles Tillman swooped in and started racking up honors of his own. Jennings became a little bit of a forgotten man, even after a historical start to the season. For centuries, poets and philosophers have been trying to tell us that life moves in cycles, so it's only right that Jennings receives the Tim Jennings Honorary Game Ball exactly one month after having the award named in his honor. To be clear, Jennings had a tough game, nowhere near as dominant as he has been for most of the season. But considering the way Steve Smith has terrorized the Bears over the years, holding him to 118 yards and no touchdowns could be looked at as a successful day.

Jennings does not win the award for his pass coverage this week, but for his go-ahead interception of Cam Newton in the 4th quarter. Had Smith not slipped, this interception probably doesn't happen, but it did, and Jennings delivered the game-changing play his team needed. At a time when the Bears desperately needed to build on the momentum of their offensive score, Jennings did more than that, adding another touchdown to give his team the lead. It wasn't the game-winner, but it sure felt like the most important play of the game.

The Optimist's Take - All of the negatives about this game, and there were many, can be construed as positives. Let's list some of them: three turnovers, just over half of Carolina's total yards, five penalties, missed 33-yard field goal, and a 25 percent success rate on third down. You look at these stats and you cannot comprehend how the Bears won this game. Actually, if you've been paying attention all year, you'd probably guess the defense won the game for them. You'd be right, essentially, but wrong to neglect the Bears' last two drives. The first started on Carolina's 38 after a shanked punt. Nothing spectacular, just 7 plays resulting in a touchdown catch by Kellen Davis, of all people. Down 19-7, it was a drive the Bears needed to convert into a touchdown if they were to stay in the game.

The second important drive was the final drive of the game. The Bears started from their own 22, 2:27 remaining, and only needed a field goal to win. What followed was a near perfect 2-minute drill. Cutler completed 7 of his 8 passes, ranging from 4 to 12 yards. Short passes, good protection, and Cutler never tried to force anything down the field. It was the type of assured drive we've been looking for during a crucial point in a game this season. If the offense needed to play terrible for three quarters to show us they could go out and win it, then we're OK with that (just this once).

We should also note, the Bears only converted two third downs all day -- one on each of these two drives.

The Pessimist's Take - So much for the offensive line "improving." We hear this every couple of weeks. The line has really shown improvement this week in practice. They're hitting their stride. We don't anticipate any problems moving forward. And then they'll string together a few good games only to see it all come crashing down. Cutler fumbled twice yesterday because the O-Line couldn't stop anybody. Then when they did stop somebody, it was because they had a hand in their opponent's face. I shudder to think of what Houston or San Francisco is going to do to this team. What's the record for most sacks in a game? Don't bother looking it up because it's going to be shattered in one of these contests.

Don't feel too good about a comeback win over Carolina. All they do is lose close games. They're like those frightened individuals who don't want to let go of their dysfunctional relationships. They hand around too long just to get hurt in the end.

YES. The Bears have already booked their flight to New Orleans, but are looking into nearby attractions just in case. The French Quarter is always a great time. What about a swamp tour? Seems like some serious Facebook photo potential there.

This Week's Adjective To Describe Jay Cutler - Celebrated. Not for his play, of course, but for the next best thing. We had previously been dreading this moment. We were unsure of how to reconcile a Bears loss with this eventual momentous occasion worthy of celebration. Thankfully, the Bears pulled out a 'W' and we could raise our fists with a clear conscience. This is what prompted our celebration:

Number Of Fucks Given - Finally!!! Some action in what we expected to be a busy section. As previously mentioned, when the Bears are playing well, Cutler is less likely to give a fuck. All year, we've been waiting for Cutty to go postal, figuring it would come in a losing effort. Instead, we got a win and a record-setting day. So many fucks given we couldn't possibly have caught all of them. So many fucks given we were inspired to type out a long, profanity-laced comment in response to a blog post we disagreed with.

The first came as Cutty made his way to the tunnel at halftime. Showered with a chorus of boos and a number of vile gestures, the least offensive of which were probably blowjob pantomimes, he appeared to look up at the disapproving crowd and mutter, "Fuckin' [something] [something]." Second fuck given came midway through the 3rd quarter. Cutty scrambled for four yards. On his way back to the huddle, he shoved Panthers' rookie cornerback Josh Norman out of the way. One of those, "I know you're not going to scrap with me and risk a penalty, so let me get away with a dick move real quick" - type of move. The third fuck was given in the beginning of the 4th quarter when Roberto Garza snapped the ball early on 3rd and 12. Cutty put his left hand up, grabbed the ball and whipped it to the turf in one fluid motion. It was as if he'd had practice reacting to stupid penalties before. 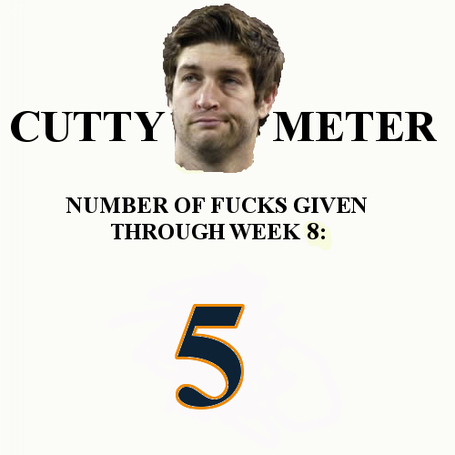 Really savor this one. We might not see a performance like it again this season. A whopping 3 fucks given this week for a total of 5 on the year. 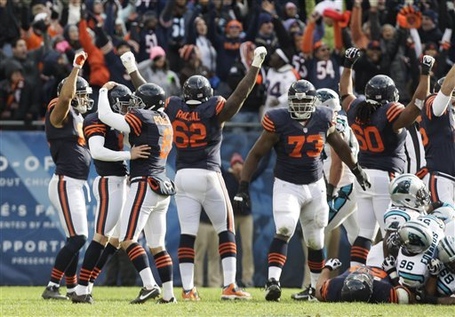 Robbie Gould experiences the sweet feeling of redemption. Maybe if Cam Newton would do a better job of congratulating his teammates when they recover his fumble in the end zone, he might get to experience this moment too.

We know we've been spoiled watching the Bears defense and special teams go about their business so smoothly. So we inquire in earnest, is it too much to ask that the defense recovers the ball before three separate players touch it? Where is the enthusiasm to take an 11-point lead over Jacksonville? More importantly, where is Aaron Rodgers congratulating his teammates? I know it wasn't a fumble of his, but shouldn't the leader of the team want to share such a rare moment with his teammates? This was Green Bay's first blocked punt for a TD in 22 years. Maybe if Rodgers weren't so stubborn about watching idly from the sidelines, the highlight of his team's game, and the game itself, wouldn't have been such an eye sore.*

* - It's come to our attention that Green Bay blocked that punt with only 10 men on the field. We're supposed to be impressed that they could block a punt down one man. We're not at all impressed. Had 11 men been on the field, they only would have managed to bungle it worse -- four people touching the ball before recovering it instead of three.