SB Nation Chicago's preview of the Eastern Conference rolls on with a look at the 76ers and Raptors from Joe Gems.

Share All sharing options for: 76ers look to make splash with revamped roster, Jonas Valanciunas provides promise for the Raptors

A team one win away the privilege of losing to the Miami Heat in the Eastern Conference Finals might be expected to head into next season with the bulk of their roster intact. Credit the Sixers for realizing [an injury which shall not be named] allowed them to play contender for a while. That was never going to last and their roster looks completely different as a result. Rather than go through each move one-by-one, here's the shorthand version of the notable acquisitions and departures:

The roster is different, but is is better? That remains to be seen. Doug Collins strikes me as a guy who plays chess against himself. He relishes the opportunity to take an entirely new group of players and find combinations that work. He'll out-think himself in the process, but should at least have his team competing with the class of both conferences.

Expect to see a lot of threes this year. Jrue Holiday, Jason Richardson, Nick Young, Dorell Wright. Look at those names! Pull-up threes. 30-foot threes. Threes not even Nick Anderson could have conceived of. Collins is encouraging them to shoot 'em too, as if they needed encouragement. He won't have the terrifying triumvirate of defenders this time around, instead forced to made due with more offensive-minded players. 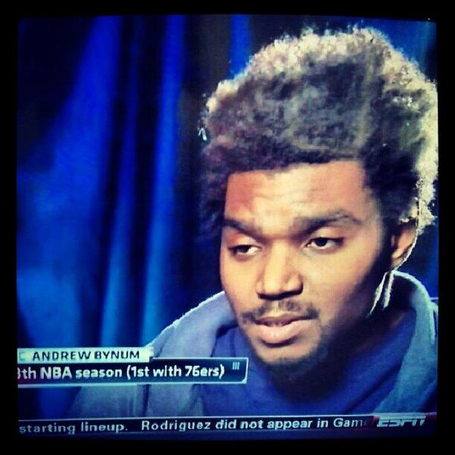 Pic via Ball Is Life

I'm worried about Andrew Bynum. Fred Sanford Appreciation Day? Prep for Don King Halloween costume? Prisoner of the Kobe System? A complete disregard for personal hygiene altogether? Or did Bynum take a look at his new teammates and have flashbacks of his time in LA. Running the floor to establish early post position over and over, only to see perimeter shot after perimeter shot go up without so much as a look in his direction?

The Sixers made a bold move in trading the face of the franchise, Andre Iguodala. They bring in Andrew Bynum with the hope that a.) He can consistently be the dominant big man we've seen for stretches and b.) His knees don't explode 15 games in. They hope Evan Turner can stay motivated when he's playing someone other than Derrick Rose. I wouldn't bet on any of those three scenarios, but I'm not the Sixers.

Best case scenario, the offense comes together, defense remains solid, and the Sixers score a second round upset to finally earn the privilege of losing to the Miami Heat in the Eastern Conference Finals. Worst case scenario, the Sixers are exposed as the same group of hard-working, overmatched talent -- the only difference from last year being the names on the back of their jerseys.

In stark contrast to the 2010 offseason, when Chris Bosh had a foot out the door for months, Raptors fans had a legitimate reason to be excited about a big name free agent signing. The hope was that Steve Nash would bypass a chance to win that ever elusive first title in favor of the opportunity to earn more money and play in front of thousands of adoring fans in his home country. Naturally, Nash wound up in a Lakers uniform.

Nash's decision was a blow to the Raptors in a number of ways. Beyond what would have been an obvious uptick in play (and ticket sales), the Raptors are now stuck paying Landry Fields 20 million dollars over three years. Perhaps "stuck" is an overly negative word, although it remains unclear if the Raptors signed Fields because they liked him as a player. Some believe the Raptors intentionally overpaid Fields to block a potential sign-and-trade between the Suns and Knicks, who looked like their biggest competitor for Nash's services at the time.

In response to losing out on Nash, the Raptors dealt a 1st rounder to Houston for Kyle Lowry. Lowry put up borderline All-Star numbers at the point before missing almost a month last season to recover from a bacterial infection. He'll excel in the pick-and-roll and greatly improve upon Jose Calderon's traffic cone-inspired defense.

Calderon might finally be dealt in this the final year of his contract. Should that happen, John Lucas III was signed to hoist up 12 shots in 15 minutes of court time. If nothing else, Lucas appears to have carved out a spot on this team as the go-to interview for good Jonas Valanciunas stories.

Last year's 5th overall pick, the 7'0 Valanciunas spent the season playing professionally in his native Lithuania. A documentary entitled Centred: The Jonas Valanciunas Story, aired in March on NBATV Candada, officially kick-starting the hype surrounding his arrival. In this documentary he reveals, among other things, his love of dancing. He also dressed up as a wizard in the Lithuanian All-Star game, listens to Gucci Mane, and thinks John Lucas III's shoes are the definition of swag. The hype train was momentarily derailed after Valanciunas' poor showing in the Olympics, but seems to be regaining steam as the season approaches. He'll probably struggle initially as he acclimates himself to the physicality of the NBA game. Andrea Bargnani, for one, is thrilled with Valanciunas' arrival. He no longer has to play exclusively at center.