Fans and media alike have spent the last, oh, six off-seasons or so throwing dirt on the Spurs. This is because they are bored with consistent success and triumph and want to move on to the next new team. Last season, San Antonio made everyone's demise claims look particularly stupid, as they capitalized on the shortened season and seized the top seed in the West. They rode a 20-game winning streak into the playoffs, where it all peaked with a 2-0 series lead against the Thunder and questions about the team's all-time greatness... before the wheels came off.

This season, the core is the core is the core. It's names you know: Pop, Duncan, Tony Parker, Manu, but for the Spurs to stay in the mix, they'll need continued contributions from younger guys like Kawhi Leonard (a monster defender on the perimeter), Danny Green (three pointers, other stuff), and Tiago Splitter (developing big who sucks at free throws).

It's not unrealistic to expect the Spurs to at least return to the Western Conference Finals, but with the Lakers and Thunder looming, one has to wonder if the Spurs are the odd team out.

Oh, and Stephen Jackson is still around.

The Portland Trailblazers didn't make the playoffs last year, and it'll be a fight to get in this season. After starting somewhat anew without Brandon Roy's in-and-out greatness and Greg Oden's hard luck in 2011-12, this season also begins with an exodus of sorts. Blazer's Edge:

So who's in? Well, the Blazers tabbed Neil Olshey as their new GM (formerly with the Clippers) and drafted Damian Lillard (PG, Weber State) and Meyers Lenoard (C, Illinois) in the first round. They're also bringing over dudes from Europe as well as a few bargain vets (Jared Jeffries, anyone?).

Gotta imagine a lot of this team's ceiling is dependent on the immediate or eventual success of their new floor general. Point guard is a notoriously slow-developing position in the NBA, and Weber State -- no disrespect -- isn't Duke, so it might be a steep curve for Lillard, but it's hard not to get exited about a guy who can do this.

The Guy I Forgot Was On The Team: J.J. Hickson 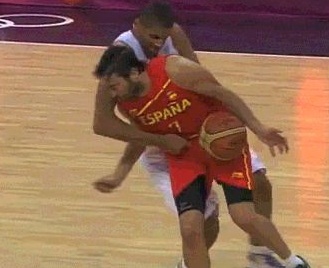