SBN Chicago's Bobby Loesch is ready for a methadone Week 7 in college football to come off the highs from Week 6.

You have to love those college football Saturdays where your team wins, a few cool plays happen in random stupid games, and they start to do the run down of the Top 10 around 9:45 p.m., and it's just IDLE, LOST, LOST, LOST, LOST, SUCKS, LOST. Not sure how I missed Alabama being inactive last week, but it's almost like that was the only reason the Tide were spared.

Because last week was so great, we'll have to assume awful things about this week until proven otherwise. I'll see the slate when you do, so I s'pose we'll just go from there.

Selective Hits On The AP Top 25

1) Alabama (60): I know everyone hates Scott Stapp, and this video is a little over four minutes and mostly tough to watch, but dudes and dudettes, I promise you the payoff at the end is slightly worth it. Keywords: suicide attempt, T.I., Creed, and your favorite college football team.

2) Oregon: I praise Oregon's intricate brilliance all the time, but I feel like we've never discussed the funny pictures they use to do their sideline play calling. File under: It's Great And If You Disagree You're Wrong. 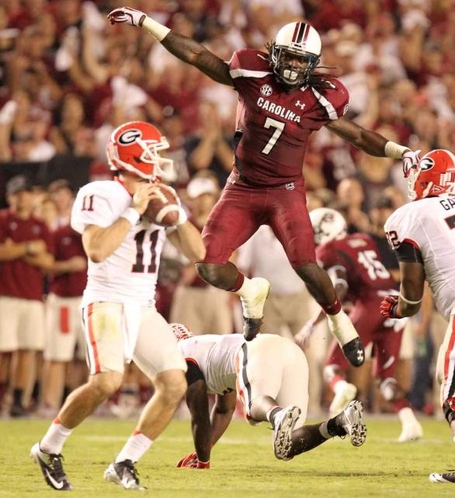 Speaking of kicking ass, if I ever played defense -- and I would never, ever play defense -- my coolest hit would probably be exactly like this.

But this is the realest reason of them all.

6) Kansas State: You rarely see a fake punt run straight up the middle where the guy gets the first down without getting touched at all.

8) Ohio State: I had a few people come to me with news of the Ohio State third string QB saying, well...

"Why should we have to go to class if we came here to play FOOTBALL, we ain't come to play SCHOOL..."

These same people assumed I'd make fun of the quote and use it to bash Ohio State, just because I like Michigan. As always, dummies assumed wrong. When have I ever defended academics or deemed them remotely important? Check my record, that's never happened. So Cardale Jones, you're pretty much right: you didn't go to tOSU to play school. It reminds me of a high school football player on Twitter who said something like "Studying defenses is more important than studying for math tests."

9) LSU: HE GONE. Now that LSU can't ruin everything for the millionth straight year, I don't mind not-hating them for the time being. I missed being in Les Miles' corner.

11) USC: Last week, I harped on MSU coach Mark Dantonio for his lax guidelines on player safety, but that was mostly motivated by my distaste of all things Mark Dantonio. Unfortunately, USC's coaches did a similar thing against Utah, and it'd be unfair/hypocritical not to call that instance out, too. Hard to feel good watching that clip.

12) Florida State: If you're gonna lose and ruin your season on the road to an unranked team you're favored to destroy, this is probably the fan you want rooting against you.

(Also, how did he get that pole? What is he standing on? Was his shirt just off for the last play?)

Also also: to keep it in the ACC, I was unreasonably amused at this V-Tech player finding scissors on the field video. I bet a coach like Saban would use that technique as a creative way to cut players his team. He wouldn't even have a sense of humor about it, either. "You found your scissors, Mark. Leave."

14) Georgia: Sure, you lost and fully confirmed every doubt and stereotype people have about your team, but, well, I got nothin'...

Clemson has a bye week, so it gives us a great chance to rest up on some of our injured players. Here in South Carolina, the Coots (Gamecocks) are ranked third in the country, but don't tell them that. They think they just beat the Green Bay Packers for Super Bowl championship.

Beating the Bulldogs has elevated their arrogance to a WWE-type level. Sure, they're undefeated, but they've played only one decent team, a very soft Georgia. This weekend, they have to travel to LSU, who has their own "Death Valley Stadium".

I also think LSU is extremely overrated -- they haven't done anything this season. They were beaten by a young, pass-less Gator team. However, don't tell the Coots this. They think they're playing a championship team, for the Lombardi Trophy. I'm serious, they are that cocky.

If they beat a 5-year-old at a game of checkers, they would celebrate by rioting in Columbia. So my Tigers will rest up and watch the Bayou Bengals play in their version of "Death Valley" and probably lose to the Coots. If this happens, Sunday morning, go online and check the Columbia arrest report.

20) Rutgers: Someone needs to apologize for Greg Schiano.

23) Louisiana Tech: Ranked, undefeated, and it feels so good. Honestly, Louisiana Tech should have been ranked last week. They're undefeated, have two wins over BCS teams, and their lowest point total of season was 44. They're really, really cool.

24) Boise State: This is what happens when you take Boise State out of your rankings, AP -- they kill cows with trucks and provide photographic evidence. So yeah: welcome back, Broncos.

25) Michigan: Hello, Big Blue! Look, I'll concede Michigan is the only two loss team in the Top 25 and probably doesn't deserve to be ranked, but two points defending it. First, they are definitely a Top 25 team, and though maybe it's a little early, they'll be in the polls at the end of the season when the dust settles; I firmly believe that they're about No. 17 in the country. We'll call them finishing there Project 17. Anyway. Two, here are some teams that also received votes, and you tell me if they should be ranked over Michigan: Duke, Penn State, Michigan State (real crappy), and Northwestern.

The Big Ten Network, bless it, has really taken steps forward over the years, but they still do their share of funny stuff. For example, during one of their many attempts to integrate Twitter and social media, they busted out this poll on the broadcast of the Purdue-Michigan game. 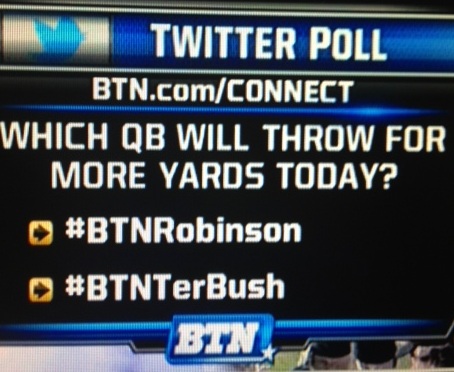 Something about #BTNTerBush... it's like the whole conference can be epitomized in that one hashtag. I have no explanation. On a broader level, why do networks and Darren Rovell feel so compelled to do these hashtag polls when *real polls* (see below in this very column) have been around for years? I will throw my wallet down a sewer if #BTNTerBush ever trends in any capacity, anywhere, ever. Could you imagine coming across it on your timeline?

Why does my team suck at football?

Nebraska: There'll be better days. A strong start (and offensive finish) was completely derailed by a comically atrocious defensive performance. I say comical because, if you're a Nebraska fan, you can't even be mad at what you saw. It was like the Buckeyes were running through paper people.

Northwestern: Haha, well that was a good novelty week in the polls. 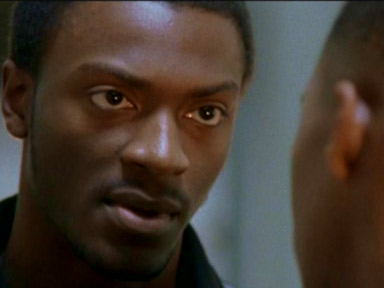 Saturday
Iowa at Michigan State: Bad game, but I'm going, so let's try to put lipstick on this pig.

Louisville (18) at Pitt: Louisville is undefeated? Are we sure?

Kansas State (6) at Iowa State: Love this game. Contender who hasn't really been 'there' before vs. the awesome Cyclones who aren't afraid of upsetting anyone around. Really trying not to jump the gun by calling this the Game of the Week. UHH, I love it.

(just kidding about this game)

Fordham at Cincinnati (21): Cincinnati is undefeated?! How are so many random ass Big East teams unbeaten this far into the season? Who were they playing out of conference? Also: Fordham?! It's, like, Week 12. How are these games still happening?

South Carolina (3) at LSU (9): Game of the Week. Do we care about the outcome? Not rhetorical, I don't really know. LSU could ruin South Carolina, and that's funny. SC could get a huge win and -- dare we say? -- supplant Alabama as No. 1. That'd be pretty cool.

Totally warrants mentioning: I heard LSU was favored -6 when this opened up, but I looked up the line Thursday, and it's -2.5... pretty huge swing, pending that -6 actually being a thing.

Tennessee at Mississippi State (19): I hate random SEC games as much as the next guy, but Mississippi state *is* undefeated and will always be funny. Seriously, they're bowl eligible with a win here.

Also just realized Oregon is off, so, like, wow, this weekend doesn't matter. 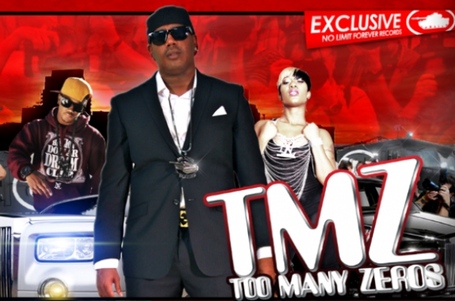 This Saturday, it'll be "Hello, Spartan Stadium". Checking off MSU leaves just Nebraska and tOSU left on my Big Ten stadium bucket list. Once completed, I'll probably do write-up on all the stadiums and say which ones were good (The Big House) and which ones were not The Big House.