Read Z.W. Martin's take down of the quite boring and uninspiring matchup of Notre Dame vs. Pittsburgh from this past Saturday. It's a doozy.

Share All sharing options for: Bored To Death: Recapping Notre Dame Vs. Pittsburgh

Author's Note: I wasn't sure if I should lede the above headline with "Bored To Death" or "Is It Over Yet", but I figured HBO's stellar comedy would dominate Wynonna Judd's terrible ballad in the old SEO game, so here we are.

Author's Note #2: Since this game was so terrible, I will do my best to make a few Michael Scott-bad jokes . Repeats are expected. You have been warned.

Author's Note #3: Also expect a Simmons-ian level of cultural references (like above). Again, dullness level was a 9.5/10.

The notes above will probably be the only things decent I write today, because the Notre Dame Fighting Irish vs. Pittsburgh Panthers' game was just that obnoxiously lame. Like "Joey" lame. Like The Boondocks Saints II: All Saints Day lame. Like every Stephen King book made-into-a-movie-since-The-Shining lame.

I woke up at 11:20 a.m. on Saturday. Well, I woke up again at 11:20 a.m. on Saturday -- I had to drive somebody home earlier (if you know what I mean). My roomy woke me the second time with some knocking and a "You know the Notre Dame game is on?" I said I did and to "Leave me alone, I hadn't gotten a lot of sleep the night before" (if you know what I mean).

I turned the game on in time to watch the Irish punt the ball, receive a punt and then fumble the ball. If you guessed Tommy Rees fumbled the ball, you would be correct -- he is responsible for nine of the Irish's 15 turnovers so far in 2011. The Panthers pathetically ran three plays for zero yards and kicked a field goal. It was good. 3-0. So tired. Notre Dame responded with a punt. I grabbed a pillow and a blanket from my room. Pitt: three-and-out. Eyelids drooping. Then... something happened!

Jonas Gray took a Rees handoff 79-yards to the house. It was the only play of the series. I subtly shifted on the couch from prone to on-my-side (that's what she said). At some point during this second quarter, Rees threw a pick, Pittsburgh kicked another field goal, punted and the Irish missed a field goal of their own. 7-6. Uninspired, I took a half-time nap.

(Serious football talk: Pittsburgh both bracketed Michael Floyd and pressed him at the line. Despite Rees' best efforts to the contrary, Floyd was impossibly covered for the majority of the game. The Irish had to make some kind of an adjustment at half to move the ball. The answer: Tyler Eifert and seam routes.)

Pitt had a fairly interesting, but still quite boring, 65-yard TD drive, capped off with a Tino Sunseri (at least his name is fun) 3-yard pass to Hubie Graham (also fun), to start the third. They failed on a two-point conversion attempt. Lame, but kind of sweet for the Irish. 12-7. I wasn't worried. Notre Dame followed with a punt. Meh. "Chopped Champions" was always on my DVR. Then, all of a sudden, Notre Dame started to put a nice little something together. Rees began showing Eifert some love (Hey, the fourth quarter! It's almost over!) -- ND punted. The Panthers followed suit.

The Irish got the ball back with 11:28 remaining in the game. I decided it is about time for me to fully raise up (that's what she said) from laying down. Actually sitting seemed appropriate now, for some reason. Rees would throw and complete five of the next 12 plays to Eifert, including the go ahead touchdown and two-point conversion. Rees went 8-for-8 on the drive. 15-12. I Tweeted this: 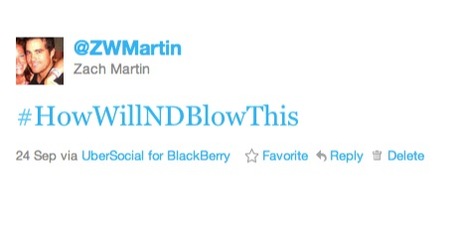 It never happened. Sunseri got sacked twice and the Panthers turned the ball over on downs.

-As I mentioned above, Floyd was pretty much double covered most of the game (4 reception for 27-yards).

-Cierre Wood (23 carries for 94-yards) is slowly becoming my favorite Irish back in my lifetime.

-Like I said in week one, Eifert is continuing the recent Irish trend of really nice tight ends (that's what she said).

-Rees continues to be a conundrum.

Read my other Notre Dame recaps: USF, Michigan and MSU.