Share All sharing options for: In Which Josh Groban Recognizes Our Blogger's Hopeless Quest to Karaoke "You Raise Me Up"

There will eventually come a time when I will get over the events of yesterday, when Josh Groban -- the real Josh Groban! -- hit up our very own Z.W. Martin on Twitter after catching wind of Zach's much hyped upcoming karaoke performance of "You Raise Me Up" thanks to a lost college football bet, but that time certainly will not come particularly soon, I can assure you of that. There has been several semi-rad occurrences to happen at Tremendous Upside Potential since our quaint Chicago sports weblog first took flight back in April of 2007, but I'm not sure if anything can touch this.

Next week, I will travel to a bar with Zach with a video camera in hand. Zach will get, at minimum, 5/8th's drunk, and proceed to embarrass himself by singing Groban's signature jam. The Grobes says he will then post the ensuing YouTube video for his 350,000 adoring Twitter followers. I still have no idea how any of this happened.

In case you missed how we got here, follow along for all the deets after the jump.

1. Zach Martin and Bobby Loesch -- my two prolific assistant editors at TUP -- staged a bet days before Notre Dame would travel to Michigan for the first night game in the history of The Big House. Zach's was born and raised an Irish fan; Bobby has actually told he would drive from his Naperville home to Ann Arbor to watch Denard Robinson sleep. As anyone who read yesterday's Hybrid knows, Bobby almost certainly was not kidding.

The bet was detailed in a post here last Friday. If ND won, Bobby would have to dress as a leprechaun, talk in a bad accent, go to church, and make a fool of himself by embodying every bad Irish stereotype for an entire morning. If the Wolverines won, Zach would have to sing Josh Groban's inspirational slow-burner "You Raise Me Up" at a karaoke bar, because the song once made former Michigan coach Rich Rodriguez openly weep.

By now, you know the results. Denard Robinson played a game for the ages as Michigan drove nearly the length of the field with under a minute remaining to score a late touchdown and pull off a shocking comeback against the Irish. Bobby cried. Zach probably should have, too.

2. Since I'm nothing if not a hype man, Zach and I taped a podcast for Thursday talking about the bet. Zach revealed that he often karaoked Vanilla Ice's seminal hit "Ice, Ice, Baby" in college. I made fun of dorky people who sing "Brown Eyed Girl". It was a pretty good time. Still, I didn't think much of it.

3. Then, out of the blue yesterday evening, without either of us tagging him on Twitter, Groban delivered the tweet heard 'round SB Nation Chicago (click to enlarge). 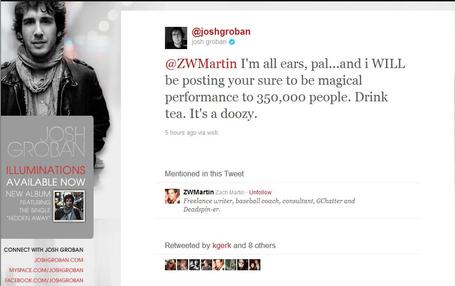 So that is where we are at. Josh Groban just gave valuable, unsolicited singing advice to Zach days before he tries to tackle "You Raise Me Up" in front of a live audience. If the Grobes follows through on his word, lots of people will see Z.W. embarrass himself. It will be awesome and I truly cannot wait.

Stay tuned next week to see the exciting conclusion of this story. It will be every bit as horrible as you're anticipating.