Now I Have To Sing Josh Groban: Recapping Notre Dame Vs. Michigan

Share All sharing options for: Now I Have To Sing Josh Groban: Recapping Notre Dame Vs. Michigan

My immediate family has a bit of an in-house rivalry. It only rains on our family parade once a year. Really, one Saturday a year -- when the Notre Dame Fighting Irish play the Michigan Wolverines in football. My father and I, Notre Dame fans. My mother and brother, Michigan folk. This year's game happened to fall on my parents' anniversary. Instead of dinner out, we decided to eat at home, while we watched Notre Dame and Michigan play in the first ever night game at the Big House -- in throwbacks, no less.

It started out nicely for my father and I. The Irish rolled to a quick 14-0 lead, followed by a Denard Robinson pick on the worst screen pass ever thrown (a theme for the night, except the bad passes eventually turned into 30-yard gains). At one point, -- amidst ribs, chicken breasts and wild rice -- the Wolverines scored a touchdown. Notre Dame answered with a field goal (after throwing two picks -- one inside the Michigan 20, of course ). Michigan had six drives in the first half, -- you know two of them -- four ended in punts. To express just how dominate the Irish were in the first half, please just read this tweet by yours truly:

The third quarter was basically a push.

Then the fourth quarter started and everything went to shit. 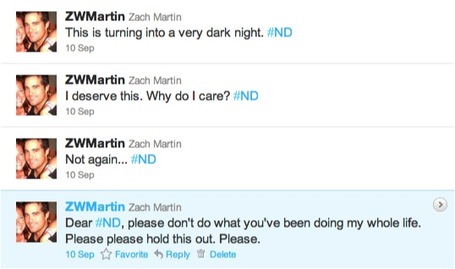 Michigan fumbles on the goal line... the ball squirts to a waiting Robinson for an easy score. Gary Gray gets beat (another HUGE theme). 10:47 left. I turned to my friend (I changed venues at half) and said, "There are at least 20 more points out there between these teams." I was eight points shy. Tommy Rees simply drops the ball inside the Michigan ten. The "Fuck-it-and-Chuck-it" is employed by Robinson, works. Notre Dame unable to convert on 3rd-and-one. Screen (24-28). Somehow, the Irish put together an insane drive and score in 42-seconds (31-28). I say to my friend Chris, -- and Michigan fan -- "No flags? No flags? Fuck you" (he's kind of dick). Karma is a bitch, however. 30-seconds left and Notre Dame does what Notre Dame does -- "[find] super duper ways to fucking blow everything." 64-yard pass. 16-yard fade and Gary Gray gets beat again. The Irish lose 35-31. I will sing Josh Groban. 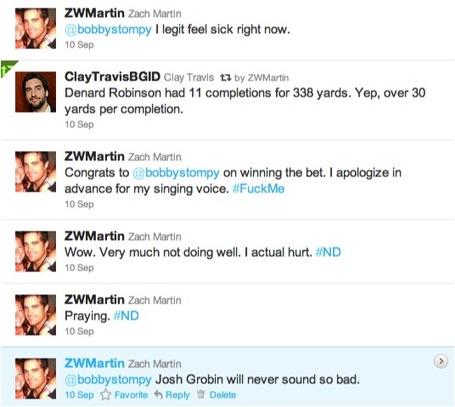 -Gary Gray is not a very good one-on-one cover corner.

-Once again, Michael Floyd is an animal (13 receptions for 159-yards).

-I think being a Notre Dame fan is bad for my health.

Stupid emoticon of how I felt after this game and shit...