On the off chance that you don't spend the majority of your free time hanging out on Twitter like the rest of the cool kids, good ole Wikipedia is here to explain 'planking', the latest web phenomenom.

Planking or the lying down game is an activity consisting of lying face down in an unusual or incongruous location.

Gilbert Arenas is perhaps the most enthusiastic athlete planker going, but he's far from alone. This is the Internet fad of the summer, and one stable enough to demand a photo gallery from Sports Illustrated. Yesterday, we got our (first?) Chicago sports tie-in and trust me, the name you're thinking in your head isn't nearly as weird as the real answer. 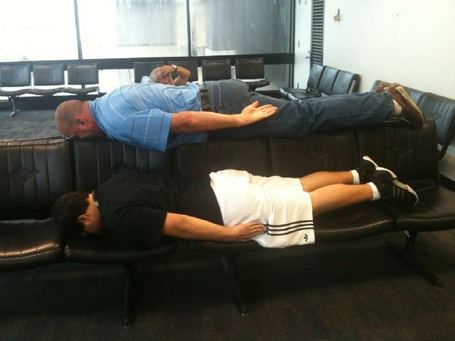 That's right, it's former Bulls center, current Bulls radio color commentator, lifelong Canadian, and BANG GANG Hall of Famer himself, Bill Wennington! As the big man tweeted, "How do you know when your lay over at the airport is too long". I'd say. Also: this fad may have just officially jumped the proverbial shark.