Ozzie Boots Geovany Soto's Catcher Mask To Mars, To The Delight Of Soto

Share All sharing options for: Ozzie Boots Geovany Soto's Catcher Mask To Mars, To The Delight Of Soto

Carlos Pena was the hero Monday as the Cubs cruised past the White Sox 6-3 at U.S. Cellular Field, but Pena's decisive sixth inning homer was far from the story of the night. In the bottom half of that inning, Ozzie Guillen would be ejected during Alexei Ramirez's at-bat for arguing that the pitch in question should have been a foul ball instead of an out for the Sox's shortstop.

Guillen went ballistic, kicking dirt on homeplate and booting Geovany Soto's catcher mask with all his might. This was about as awesome as you'd expect. The kick in .gif form, after the jump.

It's hard to see in the .gif, but the look on Geovany Soto's face is absolutely priceless. List this as reason No. 456 why the MLB needs to exit the 19th century and allow embeddable YouTube videos.

Here's a great angle from South Side Hit Girl. 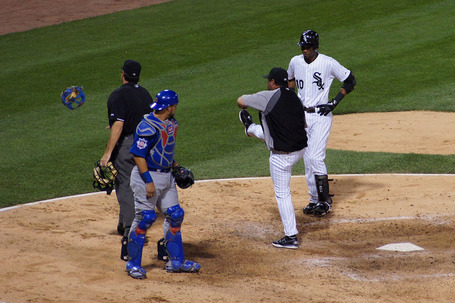 Game 2 is tonight at The Cell, pitting Matt Garza vs. Mark Buehrle.