'80s Bears Posters Are Potentially The Best Thing About the 80s

Share All sharing options for: '80s Bears Posters Are Potentially The Best Thing About the 80s

Deadspin's Emma Carmichael wondered aloud on Twitter if Sports Illustrated's gallery of 80s sports posters were pre-irony -- a noble question, yet one with a rather obvious answer. Everything about the 80s would appear to be pre-irony, from John Stockton's shorts to Public Enemy's fashion sense to Back to the Future's adorable prediction that the Cubs could actually win a World Series by 2015. Regardless, 'irony' registers somewhere between #playedout and 2000-late in these modern times, so I'm more concerned with the disappearance of once-great sports posters like the ones you'll see after the jump.

In Chicago, every Derrick Rose or Taj Gibson facial is treated with an exuberant 'WHERE IS MY POSTER MACHINE?' from your best friend Stacey King. So why aren't these 'poster dunks' ever actually made into posters? At my 1997 elementary school book fair, I vividly remember a poster of Walt Harris standing in front of planet Earth that read '75 percent of the world is covered by water.....the rest is covered by Walt Harris'. I will never forgive myself for not buying that.

So, Paula Cole, where have all the cowboys good sports posters gone? Who knows, but below you'll some all-time classics. 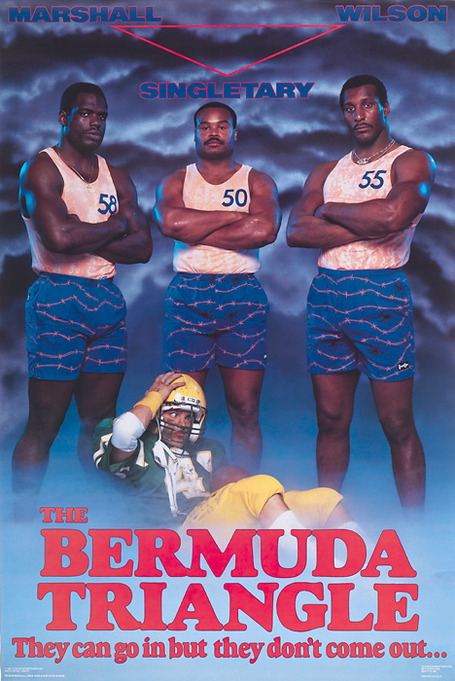 This earns a grade of 'super rad' from me for a couple of reasons, but mostly because of THOSE SHORTS. Who says men can't wear shorts? Wilbur Marshall laughs in the face of The Awl's fashion advice. Really, the entire ensemble the 80s Bears linebackers are touting is rather incredible. I feel like that get-up would kill it in Wicker Park right now.

Also: I've read and watched my fair share about the '85 Bears and I'm pretty sure no one ever called the Bears' starting linebackers 'The Bermuda Triangle'. Totally made up. Major bonus points. 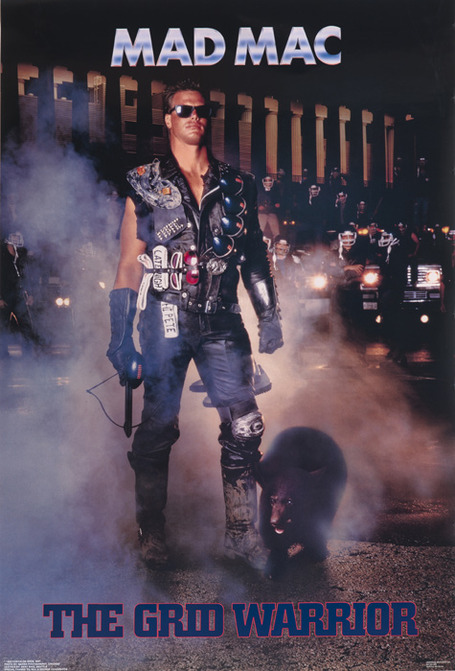 'Sup, Jimmy Mac? Let's break this one down into pros and cons. It's what Lesley Knope would do.

Pros: Is that a warthog standing next to McMahon? A baby bear, perhaps? Whatever, it's awesome.

Pros: Everyone in the background wearing football helmets, just because.

Cons: The columns in the backdrop suggest that this scene is taking place at Solider Field. What's all the ruckus for? NOTHING bad ever happens on the lakefront. I suppose they could just be pulling over Dikta for another DUI.

Here's my personal fav, even if it's non-Chicago: 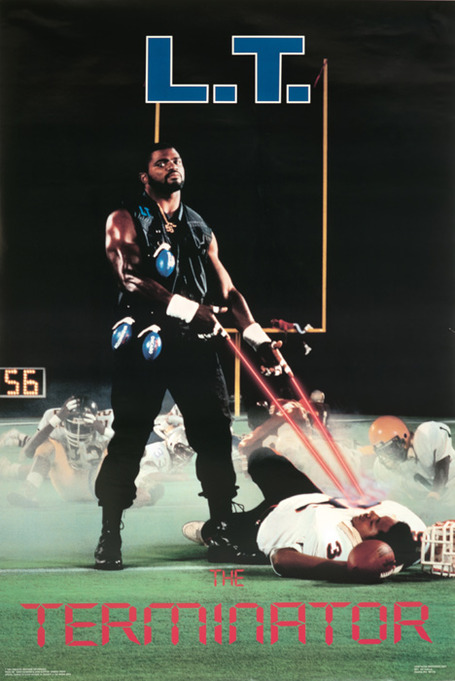