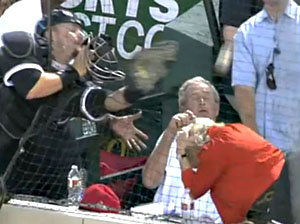 Chicago White Sox catcher A.J. Pierzynski will dive in the stands after a foul ball and it makes little difference whose lap he might end up in if it means getting an out.

Take Monday night's game against the Rangers, for example. On a foul pop-up off the bat of Adrian Beltre, Pierzynski did what he always does: he ran to the backstop to judge his chances of making a play.

The only difference: this time former president George W. Bush and wife Laura Bush were in the direct line of fire. Pierzynski lunged into the stands but came up short, making for a momentarily eventful strike call on Beltre and an opportunity for Pierzynski to get off a few one-liners.

"I just told him just because he was the President doesn't mean I won't jump on top of him," Pierzynski said according to ESPNChicago.com. "Him and his wife got a good chuckle out of that one."

Pierzynski added: "Yeah, we obviously knew he was there. When I saw that ball go up I actually thought I might have a chance just to catch it. I was like, 'Well I can reach around.' I needed about another foot.

"Then I realized I almost jumped in the former President's lap. It was funny. I had Nolan Ryan and George W. Bush sitting five feet from each other. At least I had a good landing spot if I were to go all the way over the wall."