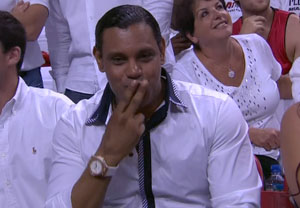 If it wasn't official before Sunday night it is now: Sammy Sosa and the City of Chicago are done. Sosa was in Miami for Game 3 of Bulls-Heat happily sporting "Miami white." The Bulls lost 95-86, and now trail the Heat 2-1 in the Eastern Conference finals.

As for Sosa, we haven't heard much from him since his Major League Baseball career ended in 2007 with the Rangers (save this obvious exception), and he last played in Chicago in 2004. His most lasting highlight (eventually turned nightmare) came in 1998, when Sosa and Mark McGwire battled history and each other for the single-season home run crown. McGwire wound up with a then-record 70, and Sosa finished with 66.

Allegations of steroid use getting caught with a corked bat in 2003 all but sealed Sosa's fate with Cubs faithful. By 2005 he was with the Orioles, one season away from an inglorious ends to his playing days.

And now, after Sunday's appearance in Miami, there's likely no going back. Sosa and Chicago are broken up for good.