Bulls, Heat Genuflect at the Altar of Oprah

Game 2 of the Eastern Conference Finals was delayed a day thanks to Oprah's final show. While you might expect the players and coaches involved to be upset, that was hardly the case.

Share All sharing options for: Bulls, Heat Genuflect at the Altar of Oprah

If Tuesday night felt a bit empty for sports fans around Chicago, it's because the Eastern Conference Finals were forced to wait one more day to tip-off Game 2. The United Center was the only venue in town big enough to house Oprah's final show, you see, and no matter how intimidating  David Stern can be, he still has no prayer of competing with The Queen of Greektown (cc: BDL) on her big night.

Not since Kanye West set off metal detectors and shamefully received a cascade of boos at a Bulls game earlier this season has the UC seen so much star power.Tom Hanks was there, presumably acting all Tom Hanks-y, as was Madonna, Jerry Seinfield, and Maya Angelou. Beyonce reportedly performed her horrible Major Lazer-influenced new single (just gimme 'Pon de Floor', right?), while proving she's the only living American who can still look pretty hot in a tuxedo shirt. A quaint, understated man named Michael Jeffrey Jordan happened to be in the house (that he built!), too.

Yep, the United Center went all-out for the Big O. They stopped short at adorning the Jordan statue in the color purple, and yes, that's the biggest upset of the night. You'd think that all of this would potentially rub some Bulls and Heat players the wrong way by momentarily halting series momentum and forcing some of the biggest egos in the universe to take a backseat to some bro named Stedman, but that was hardly the case. The players almost seemed *honored* to give way to Oprah. It's like she's one of the most beloved personalities of all-time, or something. Who knows. I only watch sports and "Community".

Even still, I know enough to assume that if any two NBA players were to give a classy response on the matter, it's Derrick Rose and Dwyane Wade. Each was respectively raised in the rough-and-tumble streets of Englewood and Oak Lawn (ha!), so it's no doubt that they've had women in their life championing Oprah for many years. They told the Tribune:

"It's a huge event for Chicago, for Oprah, obviously," Heat guard Dwyane Wade said. "We'll take a back seat to Oprah any day."

Said Bulls guard Derrick Rose: "That's Oprah, man. She can do whatever she wants in this city. Mom and family are going to it. Everybody is hoping for gifts."

"Everyone is hoping for gifts". Oh Derrick, that part made me LOL for some reason. But while Rose is the unquestioned champ of borderline adorable, purely genuine unintentional comedy whenever he opens his mouth, leave it to the Bulls' leading comedian Tom Thibodeau to drop one of the best lines around.

"We love Oprah," Thibodeau said with a wide smile. "I had to say that or my Mom would kill me."

This is probably the first time Thibs has smiled since the day he was hired.

Other stuff related to SPORTS: 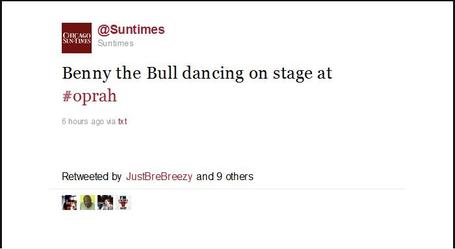 -- MJ drew the loudest ovation of the night. Via Entertainment Weekly's Oprah live blog that I swear a female friend sent me:

9:30 p.m. Wow. These women are screaming for Michael Jordan. This is the most applause anyone’s received so far.

Game 2 is tonight, and thank goodness for that. Who's ready for some basketball?